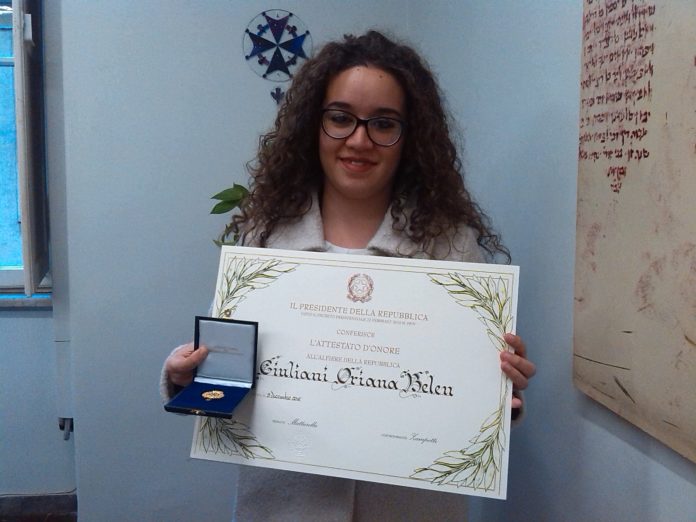 Rome (NEV), December 31, 2016 – Among the “Alfieri della Repubblica” (ensigns of the Republic) to whom on December 13th the Italian President Sergio Mattarella conferred the certificates of honour, was also the seventeen years old Oriana Belen Giuliani, a girl member of the Baptist Church of the Marche Region, hit by the recent earthquake. Oriana, daughter of Luis Giuliani, pastor of the Baptist Church of Civitanova Marche and Tolentino, together with her family was received at the President’s Palace “Quirinale” for the delivery of the acknowledgment.

The title is endowed every year by the Italian President to highlight special merits in the field of culture, study, science, art, sport, voluntary work and single actions or behaviours inspired to altruism and solidarity, able to propose positive models for the new generations. The municipality of Tolentino proposed the girl for the acknowledgment as representative of the young people that during these past months have been engaged in an important relief work for a group of about 20 elderly persons who have lost everything in the earthquake that hit the area last August.

After the ceremony, Oriana and her family paid a visit to the nearby offices of the Federation of Protestant Churches in Italy (FCEI), were the president pastor Luca Maria Negro, could congratulate her personally.