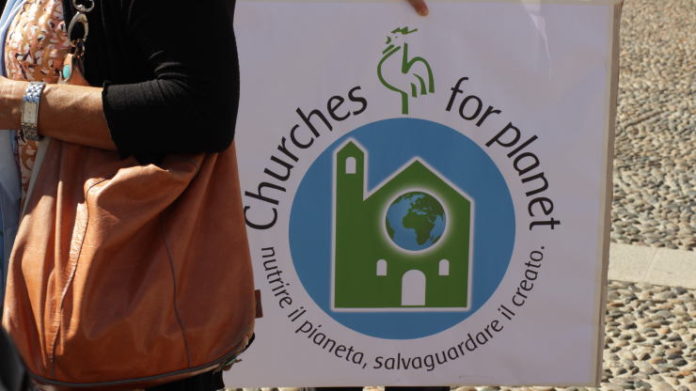 Rome (NEV) January 19, 2017 – As it happened in 2013, the “Green Cock” international award was again assigned to the Waldensian Church of Milan. The acknowledgement is conferred every four years to the church community that has most reduced its environmental impact. The official award ceremony took place last Sunday January 15th, at the Waldensian Church in Via Francesco Sforza, in the presence of the biologist André Witthöft-Mühlmann, in charge of the Environment and Energy office of the Evangelical Church of Baden (Germany).

“This second assessment is very important – explained Giuseppe Platone, Waldensian pastor of Milan – because a congregation that adheres to the ‘Green Cock’ project is engaged, not only to enter the program ideally, but to follow its many standards that include: the abolition of plastic cutlery and dishes during fraternal meetings, by which means of transportation you go to church, the recyclable-waste collection, the synergy with all those involved in environmental sustainability. For this reason we particularly appreciated the presence, at last Sunday ceremony, of the public authorities. After a very participated worship service, we had an intense debate over the conditions of our planet: it was a splendid moment of civic sharing”.

Started in Germany in 2001 with the goal to generate an environmental management system specifically addressed to churches, the “Grüner Gockel” (in German) project has the support of many Protestant, Catholic and Orthodox churches in several European countries. In Italy, the Waldensian Church of Milan was the first – and so far remains the only one – to be certified.