Rome (NEV), February 27, 2017 – One year ago the first large group of Syrian refugees arrived safely to Rome Airport thanks to the pilot project of “humanitarian corridors”. It was the 29th of Febraury, 2016. Only a few days earlier, with an airlift from Beirut Lebanon, little Falak with her family had arrived from Homs (Syria). Actually opening the first safe passage to Europe for vulnerable refugees. Today Falak, who suffered from a eye tumor and was in need of immediate care, is well and attends a primary school in Rome. 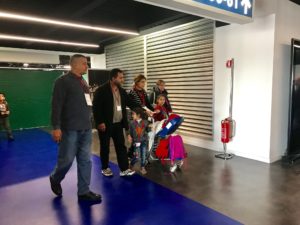 Today, Febraury 27, other children, other women and other vulnerable persons, arrived at Fiumicino Airport with a regular visa for humanitarian reasons, issued by the Italian consulate in Beirut. About fifty people that will be accepted by the partners and the structures of the project promoters: the Federation of Protestant Churches in Italy (FCEI), the Waldensian Board and the Community of St. Egidio. In agreement  with the Calabrian Municipalities of Riace and Gioiosa Ionico, known for their good practices in the field of migrants and refugees integration, three Syrian families will be received precisely in that contest of “accountable municipalities”. By strengthening synergies between civil society and local authorities, another brick is added to the good practices of hospitality experienced so far by the project promoters.

The total amount of safe arrivals to Italy thanks to this project will amount to nearly 700 persons. 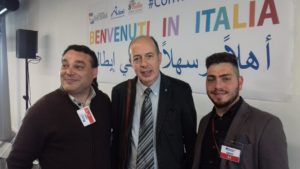 To welcome the group at the Fiumicino airport this morning, among others, were present pastor Luca Maria Negro – FCEI president,  and Susanna Pietra – director of the 8 per thousand Office of  the Waldensian Board.