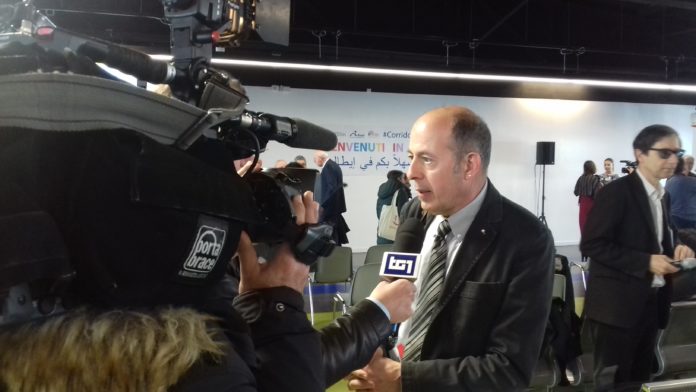 Rome (NEV), February 28, 2017 – “When the Lord brought back the captives, we were like men who dreamed”. This is how pastor Luca Maria Negro, president of the Federation of Protestant Churches in Italy (FCEI), rewording Psalm 126, started his speech yesterday morning at Fiumicino Airport, to welcome a new group of Syrian refugees arrived to Italy thanks to the humanitarian corridors project, promoted by FCEI, the Waldensian Board and the Community of St. Egidio.

“When one year ago we welcomed the first group we thought we were dreaming.  It was a dream we had pursued with determination and which became true. 700 people received and initiated into integration. But we cannot be content with ourselves: what are the 1000 we have planned to accept in front of the migratory emergency? Well, Psalm 126 continues with a prayer and says ‘the Lord brings back the captives like streams in the desert’. Strengthened by this verse I would like to reassure the populists, our local ones and those abroad. It is no question of an invasion. We are convinced that our country, like all other European countries, still has the chance to welcome people and that the migrants’ presence is not a threat, but an enrichment. This is evidenced by the cooperation with local public institutions we are working at. A witness of that is the presence here today of Maurizio Zavaglia, president of the Town council of Gioiosa Ionica (Reggio Calabria). He will bring 18 of these friends of ours to Gioiosa and Riace, as an asset for an area in need for fresh forces. I would like to conclude by thanking all of our operators: the ones of FCEI and those of the Community of St. Egidio. In particular those who worked in Lebanon under often difficult circumstances. A few days before the January arrivals, there was an explosion less than one kilometer from our operators. We all had fear: without the courageous contribution of these people our dream could not become real”.

When the Lord brought back the captives from Zion,

Our mouths were filled with laughter,

Our tongues with songs of joy.

Then it was said among the nations,

“The Lord has done great things for them”.

The Lord has done great things for us,

And we are filled with joy.

Those who sow in tears

Will reap with songs of joy.

He who goes out weeping,

Will return with songs of joy,

Carrying sheaves with him.