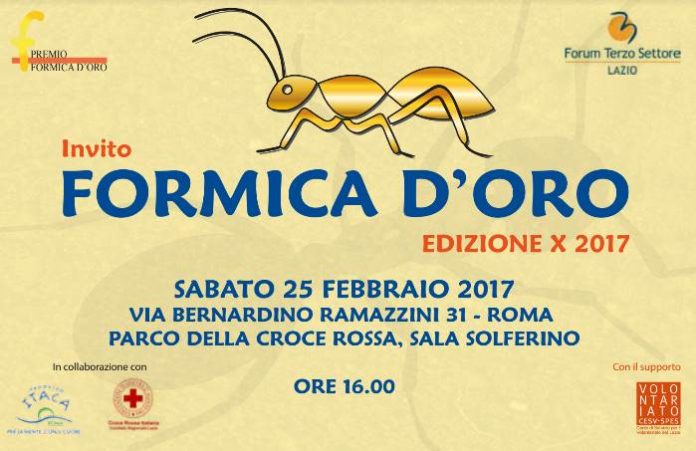 Rome (NEV), March 4, 2017 –  The “Golden Ant 2017” awards were assigned in Rome on February 25th to agencies or individuals who distinguished themselves in the promotion of innovative experiences in the fields of community service, communication, local government and research. The recognition is assigned by the Third Sector Forum of the Lazio Region since 2007.

For its service in the field of aid to the person, one of the twenty “Golden Ant” this year went to Italy’s Salvation Army. The initiatives that motivated the award are two, both launched in Rome during winter 2016-2017: the ‘pending cappuccino’ activated in the coffee bars in the neighborhoods of San Lorenzo and Tor Bella Monaca in favor of homeless and needy people; and the Christmas project ‘Angel tree’ thanks to which children of destitute families could receive their gifts from Santa.

The Forum of the Third Sector of Lazio was born in September 1999 to represent, promote and enhance regional action of volunteers, associations, cooperation and social enterprises. To today it counts about 300,000 members. The “Golden Ant” prizes recall the industriousness of the little ones, the good practices and gestures that help, from the grass-roots, social welfare.
The Salvation Army is a Christian church of Wesleyan matrix, which is rooted in the holiness and awakening movement of the nineteenth century.