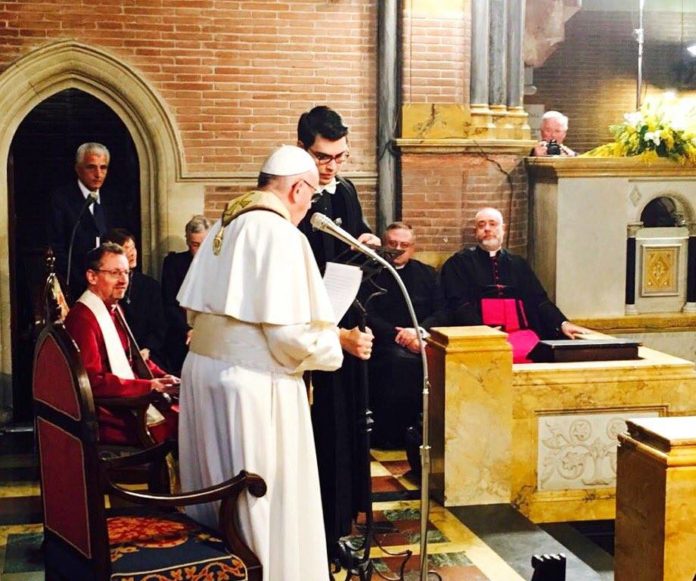 Rome (NEV), March 6, 2017 – A celebrating community hosted, on February 26 afternoon, Pope Francis in the Anglican All Saints’ Church of Rome. It was the first time that a Bishop of Rome – this is the name by which the Anglican Bishop Robert Innes greeted the Pope – entered Via del Babuino. The occasion was the 200th anniversary of the Anglican presence in the eternal city, a celebration the All Saints’ community wanted to live in the largest ecumenical dimension, with the participation of numerous Catholic, Orthodox and Protestant partners.

“During these two centuries – Pope Francis said, preaching in front of a crowded church – much has changed between Anglicans and Catholics, who used in the past to look at each other with suspicion and hostility; today, thanks to God, we recognize ourselves as we really are. As friends and pilgrims wishful to walk together, following together our Lord Jesus Christ”.

Besides the Bishop of the Anglican European Diocese, Robert Innes, Pope Francis was welcomed by his suffragan David Hamid, by the All Saints’ chaplain Jonathan Boardman, by the woman priest Dana English and by Bishop David Moxon, delegate of the Archbishop of Canterbury at the Holy See and director of the Rome Anglican Center.

As happened on similar occasions, the ecumenical worship foresaw a moment of conversation with the host community whose members put questions to Pope Francis. At this moment Francis announced the project of a journey to South Sudan together with the Archbishop of Canterbury, Justin Welby, in acceptance of the request of the Anglican, Presbyterian and Catholic Bishops of the Country to go and visit them, at least for one day, together with the Archbishop of Canterbury. “We have to do this because they look for peace, they work together for peace…” – concluded the Pope.

Another meaningful moment of the celebration was the twinning of All Saints’ and the Catholic parish of All Saints’ of Via Appia Nuova, already working together in the service to the poor.
Finally the All Saints’ church offered to Pope Francis some gifts: from the funding of weekly dinners for the poor of the Ostiense district or the purchase of English Bibles for African women enslaved by trafficking, to homemade jams and a simmel cake, a traditional Easter cake. Gifts that well describe an afternoon spent in solemnity and familiarity.