Rome (NEV), March 16, 2017 – During the meeting with a delegation of the Evangelical Church of Westphalia (Germany), the President of the Senate of the Italian Republic, Pietro Grasso, gave a long interview to the online newspaper “Riforma.it“. In the interview he expressed his conviction that the future of Europe is closely linked to religious pluralism, due to the increasing mosaic of faiths present in the same territory closely connected with migration. 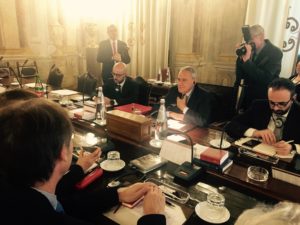 He also stated that the project of ‘humanitarian corridors‘ is certainly a good practice of reception and recognized in primis to the Federation of Evangelical Churches in Italy (FCEI), the Community of Sant’Egidio and the Waldensian Board, the merit of having set it up together with the Ministries of Interior and Foreign Affairs.

To the respect for the work of the Protestant churches, Grasso expressed appreciation for FCEI’s project in Scicli (Southern Sicily), the “House of Cultures”, a point of excellence in welcoming unaccompanied minors. On the eve of the celebrations for the 60th anniversary of the Treaties of Rome the President stated that it is first of all important to remind everyone that the European Union has its roots in the will of the European peoples who, sixty years ago, in the aftermath of World war II, demanded peace, security and progress.

Secondly, Europe today faces new challenges: inequalities, terrorism, migration, nationalism. The only way to continue the path of European integration, is cohesion, multilateralism and rights: Europe must restart from Rome.