Roma (NEV), 4 April 2017 – On March 30th a “Luther tree” was planted in Turin to celebrate the 500th Anniversary of the Protestant Reformation. 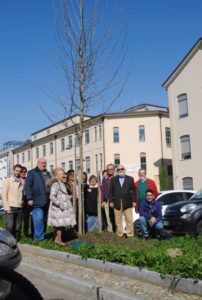 Attending the event were representatives of the Adventist, Lutheran, Baptist and Waldensian Churches.

An initiative that the German city of Wittenberg (where the Reformer Martin Luther in 1517 nailed his 95 theses against indulgences) proposed to 500 municipalities in the world: for each planted tree a twin – accompanied by a plaque in honor of the sister city – will be planted in Wittenberg’s “Luther garden”.

Baptist pastor Alessandro Spanu, on the occasion, illustrated also the initiative undertaken by the local protestant churches to have a square in Turin named after the Reformer.