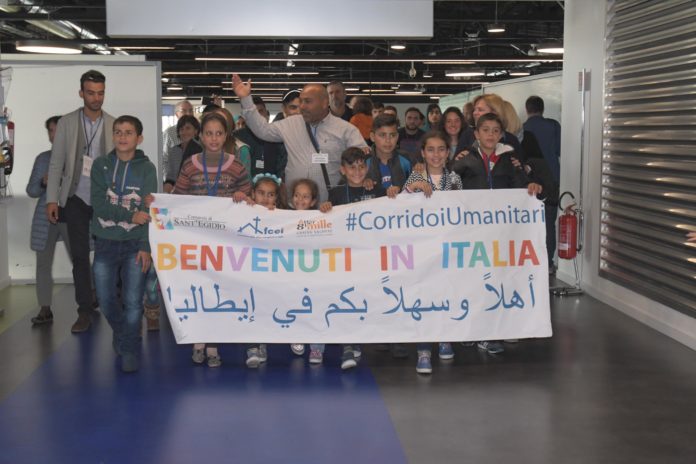 Rome (NEV), April 27, 2017 – Another group of 68 Syrian refugees from Lebanon arrived this morning at Fiumicino airport via the humanitarian corridors promoted by the Federation of Protestant Churches in Italy (FCEI), the Waldensian Board and the Community of St. Egidio. Tomorrow, April 28th, other 57 people are foreseen to arrive. With these two new arrivals of 125 people, mainly families among whom 48 children, the figure of almost 800 people will be achieved: asylum seekers arrived in Italy through a safe and legal way since February 2016, in agreement with the Ministries of Interior and Foreign Affairs.

To welcome the new group a press conference held at 11.00 a.m., with Marco Impagliazzo, president of the Community of St. Egidio, Paolo Naso, representing the Italian Protestant Churches, Mario Giro, vice-Minister of Foreign Affairs, Donatella Candura, Ministry of Interiors’ Department of Civil Liberty. Some of the refugees arrived in Italy in the last months were present at Fiumicino to welcome newcomers, together with laic and religious associations, institutions and single citizens who offered themselves to host refugees in the different Italian regions.

While in Europe, mainly for electoral reasons, migration is exploited in political terms, the  increasing engagement of Italian  civil society demonstrates that an alternative model is possible to welcome and integrate women and men otherwise victims of human traffickers (families with children, single women, elderly people, sick and disabled persons). All this thanks to the generosity of many Italians with a totally self-financed project. A project which can be extended and in fact is already spreading in Europe. In France, last March 14, an agreement was signed with similar procedures to the Italian ones. Other countries have shown interest in the project too. During a meeting held on April 25 with Andrea Riccardi and Marco Impagliazzo of the Community of St. Egidio, Angela Merkel herself expressed appreciation for the humanitarian corridors project. Some of the German Evangelical Churches, in particular the Evangelical Church of Vestfalia, are already generous donors of the Italian project.