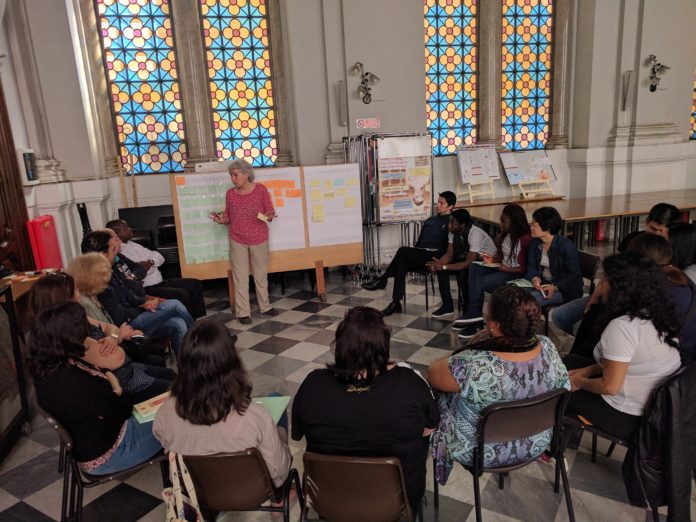 Rome (NEV), May 16, 2017 – Building Church unity despite linguistic and cultural barriers. This is the goal of the Intercultural Laboratory for Training and Reception (LINFA, the acronym means lymph), created by the Federation of Protestant Churches in Italy (FCEI) to face up to an historical fact: migrants make up one third of all the protestants in Italy. To open the second two-year cycle (May 2017 – July 2019) was the first national workshop that took place from May 12 to 14 in Rome.

LINFA, promoted by the FCEI’s Commission for Integration and Dialogue “To be church together” – in collaboration with the Baptist Christian Evangelical Union in Italy (UCEBI), the Waldensian and Methodist churches, the Adventist church, the Waldensian Faculty of Theology, the Pentecostal Faculty of Religious Science, the Italian Youth Federation in Italy (FGEI) – is open to all active members of the participating churches, whether Italians or foreigners, and proposes a hybrid path made of intercultural exegesis, ecclesiology, missions’ history and development, conflicts mediation, group dynamics, animation techniques. The methodology of the laboratory – whose activities are carried out in Italian – is that of the cooperative learning, a method which favors reflection and common research, interweaving them to the commitment in local communities.

Each enrolled member will be followed by a tutor who will accompany him/her on a path that foresees collective and individual study as well as practical exercises. For their part, participants are committed to carrying out the planned activities – at national, regional or local level – and to attending the two national and macro-regional meetings scheduled in the two-year period. Those who will profitably make the entire route, shall get an attestation.

The first edition of LINFA, which ended in June 2015, attracted more than 60 participants. FCEI intends, in launching the second edition of the project, to respond to the many requests received from member churches about a training centered on intercultural issues.