Rome (NEV), July 11, 2017 – On the 10th of July, the Mediterranean Hope (MH) program for refugees and migrants promoted by the Federation of Protestant Churches in Italy (FCEI) received a recognition Award for the work carried out on migration, integration and for the “Humanitarian Corridors” project. The award was issued by the Global Ministries of the United Church of Christ (UCC) and the Christian Church of the Disciples of Christ, on the occasion of the General Assembly in Indianapolis (USA) (held from 8 to 12 July).

Marta Bernardini, MH’s operator, present in Indianapolis, said: “We are honored to receive this award by such an important international partner, who supports us in this difficult work we have been doing. Together as churches that want to witness the Gospel but know the challenges of our time, we try to break the isolation and the defeat that often pervades us, by remembering each other where we want to stay and what we want to fight for“. 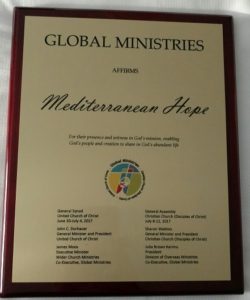 The issue of migration was one of those discussed during the General Synod of the United Church of Christ (UCC) (30 June – 4 July, Baltimore) and the Assembly of the Disciples of Christ in Indianapolis. The Mediterranean Hope project had the opportunity to present its commitment at several workshops and participate in the debate on some immigration motions that arose during the two conferences. The General Synod of the UCC, amongst other motions, has approved a specific issue on migration that claimed the UCC “a welcoming church for immigrants, with even the aim of applying political pressure”.

The Global Ministries published on their website the English version of the FCEI’s letter submitted to the ecumenical partners and European sister churches to solicit them on the high priority issue of global migration also at the UN level.