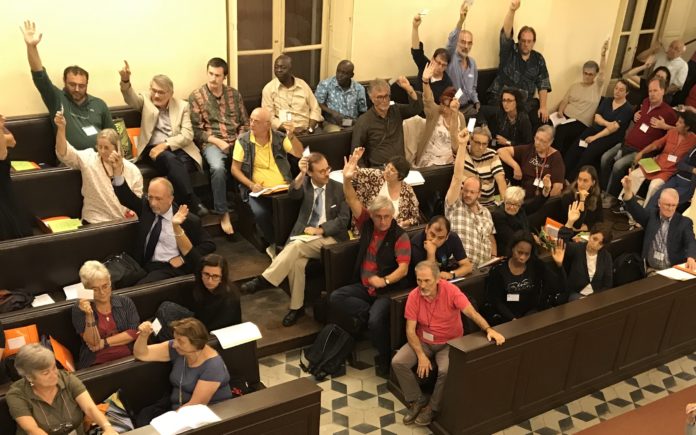 Rome (NEV), September 6, 2017 – The Synod of the Methodist and Waldensian churches, after a lengthy and articulated debate, largely approved the document “Families, Marriage, Couples, Parenthood”. In the light of the new Italian law on these issues, the liturgical blessing is introduced for the couples united in a ‘civil partnership’, who ask for it. In order to receive the blessing, however, some requirements remain, such the obligation, for at least one of the two partners, to be a member of the local church.

Paola Schellenbaum, member of the “Families Commission” which elaborated the innovative document – the first since 1971 – , spoke of an ‘historical event’. With this document – she explained – the intercession prayers are not excluded, there is in addition a formal ratification for the same sex couples, long sought after by the Methodist and Waldensian churches which, in 2010 had already introduced the blessing of homosexual couples – a practice now overcome by the current legislation.

The document goes far beyond the issue of homosexual couples recognition. With its approval, Methodists and Waldensians recognize the plurality of models of life communion and family present in our society, underline the need of their acceptance and of their accompaniment, as well as their commitment to society in favor of further enlargement of rights on these themes.

“A balanced document of freedom and responsibility, both in the juridical and liturgical context, which has seen an important theological debate developed on the concept of blessing in its various forms, a concept that always refers to people, and not to the juridical forms of union, which for the Waldensian and Methodist churches are not sacraments”, said Pastor Mirella Manocchio, a member of the “Families Commission” and president of the Methodist Churches’ Work Organization in Italy (OPCEMI).