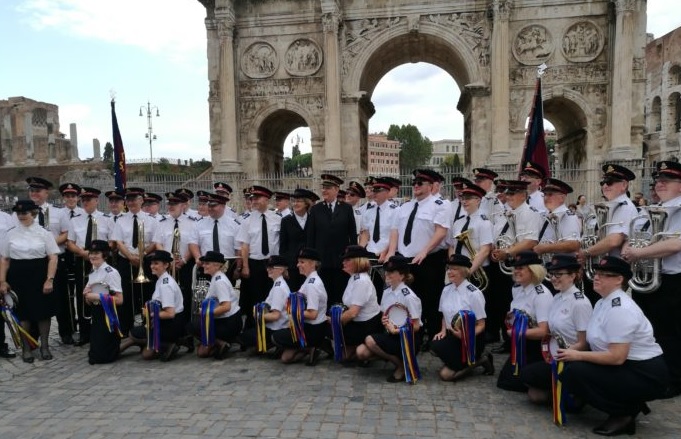 Rome (NEV), September 21, 2017 – It was a joyful event what recalled, last September 16th, the arrival of the first “Salvationists” in Rome, in 1887, who soon spread throughout the Pensinsula.

The officers and the soldiers of all the corps of the Salvation Army present in Italy – from Turin to Naples, from Milan to Atena Lucana – gathered at the Central Command of Rome, in the district of San Lorenzo.

Special guest of the celebrations, were the General André Cox, from the London International Headquarters, and his wife Silvia Cox, head of the global women’s ministries. With them also the band and the drummers of Boscombe (Great Britain) which performed two concerts, one on Saturday morning under the Constantine Arch near the Coliseum, the second at the Congress Center in Via de’ Frentani, where on Saturday afternoon took place the main celebration event.

“We are the world’s largest army with more than one million soldiers and officers, present in 125 nations around the world” – Cox said during his speech -. An army that does not ask its members to record their names in a church register, but to be real soldiers willing to work on the ground to preach the gospel and serve the weakest and the most vulnerable”.

The meeting at the Frentani Convention Center, was chaired by Lieutenant Colonel Massimo Tursi and by Major David Cavanagh, respectively commander in chief and general secretary of the Italian and Greek Command. Since a few years, the two countries are united in one Command and a delegation from Athens also attended the event.

The stages of the Salvation Army’s history in Italy were traced back by the young Salvationists who recalled, among other things, the dramatic events of 1940, when, with the entry of Italy into the war, the Salvation Army was officially dissolved, the officers were distrusted to gather, some of them were arrested and sent to confinement or condemned to internment camps.

Among the guests attending the various moments of the day we recall the auxiliary Bishop of southern Rome, Msgr. Augusto Paolo Lojudice; Pastor Mirella Manocchio, president of the Methodist Churches’ Work Organization in Italy (OPCEMI); the dean of the Lutheran Evangelical Church in Italy (CELI), Heiner Bludau; the pastor Luca Baratto, representing the Federation of Protestant Churches in Italy (FCEI).