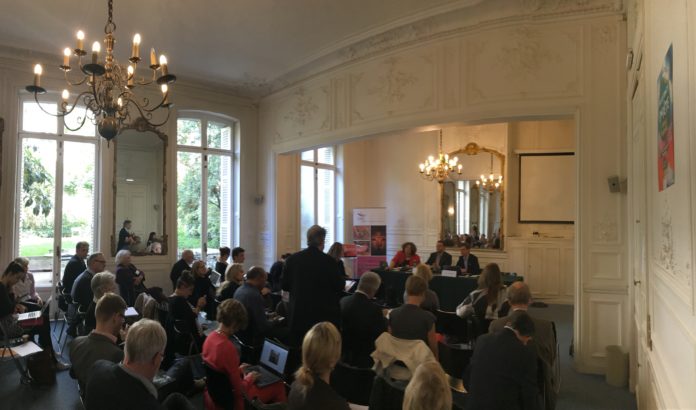 Rome (NEV), 29 September 2017 – The “Turn it up!” conference for church communicators, lately organized in Paris (France) by the Conference of European Churches (CEC) with the purpose to “amplify the Christian voice in a secular Europe” providing a platform for discussion, had among its speakers a contribution from Italy. Gaëlle Courtens, Press Officer of the Federation of Protestant Churches in Italy (FCEI) and News Editor of the Press Agency “NEV-notizie evangeliche”, explored what it means to work in media relations when trying to get the voices of tiny Protestant minority churches heard, especially when having the Pope next door (find her paper here). She spoke after María-Paz López, correspondent of “La Vanguardia” in Berlin, and founder of the “International Association of Religion journalists”, in a panel dedicated to “Perspectives from Journalism: Church and Secular Contributions”. 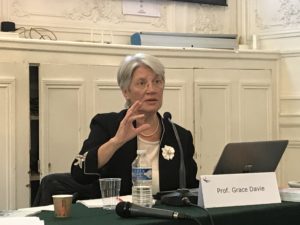 Among the speakers of the conference, held at the “Maison du Protestantisme” from 20-22 September, was sociologist of religion Grace Davie from the University of Exeter (UK). She presented a framework to understand the religious landscape in Europe. Davie suggested there are two parallel developments: first that Western European societies are increasingly secular overall. At the same time, in parts of Eastern and South-Eastern Europe Christianity has grown in importance both in people’s everyday lives and in societal influence. The Ambassador of the Republic of Serbia to UNESCO, Darko Tanasković, held a talk on what is to be meant by “secularism”, “secularity”, and “secularization”, pointing out how this differences are often unknown by politicians, and/or humanitarian activists. In Eastern European countries, he said, often NGO’s tend to be too aggressive by upholding human rights (what per se is of course a good thing), with the result of an “identitarian” over-reaction in the local population.

The gathering of journalists and church communicators saw about 50 professionals participating from all over Europe, exchanging experiences and best practices, and learning more about pan-European issues. “The encouraging response to Turn it up! confirms that there is a demand to discuss how we Christians and churches communicate”, concludes Henrik Hansson, Communication Coordinator of CEC. The aim of the organizers is that it will become an annual gathering.

In his opening remarks CEC Vice-President Metropolitan Emmanuel of France said that “communicators are the voice of the Church and are the key to give life to the gospel”.

The event was organized by Conference of European Churches (CEC) in partnership with the French Protestant Federation and the Federation of Evangelical Baptist Churches of France.