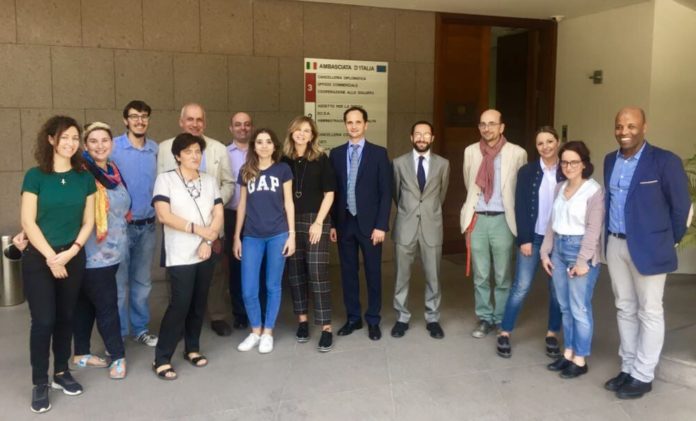 Rome (NEV), October 23, 2017 – On Friday October 20th, the ecumenical team of the ‘humanitarian corridors’ project, was received by the Consul Valerio Giorgio at the headquarters of the Italian Embassy in Beirut (Lebanon). “A time of cordiality, an opportunity to thank the Consul and his staff for these months of close collaboration”, said Simone Scotta, operator of the Federation of Protestant Churches in Italy (FCEI), among the components of the team which has been active on the ground for almost two years.

A week before the last ‘humanitarian corridor’ which will bring the number of the beneficiaries of the project to little more than 1000 – as envisaged by the protocol signed between the promoters and the Ministries of Interior and Foreign Affairs – the Consul, together with his staff and to the one of the Visas Office, expressed satisfaction for the work done together.

The project allows particularly vulnerable refugees to access, once they have arrived in Italy through a humanitarian visa, to the right of seeking asylum without risking life at sea and without increasing the traffickers’ business. In one year and half, almost 900 people with 15 flights arrived in Italy through this safe and legal route. The 16th and last flight, scheduled for this protocol, is on the agenda on October 27, arriving in Rome Fiumicino, with 120 refugees.