On the 22 of January in New York at the United Nations the 4th Annual Symposium on the “role of religions and faith based organisations in international affairs” was held, with a particular focus on the theme of forced migration. And this is already important news since it attests to the fact that faith communities are today an important player on the international scene of solidarity. But the most important fact that emerged during the symposium is that 50% of the resources used by the various countries and institutions to manage the current migration crisis comes precisely from this world of faiths and spiritualities.

In a time that perhaps we have defined so easily as secularised, believers and their communities do bear witness to their faith. And, nonetheless surprising, lots of faith communities express their commitment with others, ecumenically or with coordinated actions at an interreligious level.

This is the other side of religions committed against fundamentalism and radicalism, which instead disseminate hatred and undermine cohabitation in many areas of the world – from the Middle East to West Africa, from South-east Asia to the United States, where today radical and sectarian movements are spreading by claiming an evangelical tradition, as never happened before.

Almost recovering its original soul, the ecumenical movement of the 21st century is not only a combination of shared formulas. Above all, it expresses basic and essential actions. This is the heart of today’s ecumenism, and it has been significant that the New York Symposium affirmed it. However, it is regretful that concrete actions in this regard have not been mentioned in any final report. 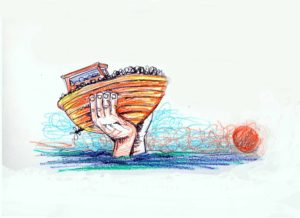 There are, in fact, Christian ecumenical groups who have been working together to foster hospitality and fight nationalist and populist policies which only aim at making immigrants the great scapegoat of the 21st century. In recent years, Catholics, Protestants and Orthodox have made important gestures such as being present all together along the borders in which thousands of migrants have been trapped inside centres that prevents them from going forward, but also often backwards. It happened between Greece and Turkey, between the United States and Mexico, as well as at the Hungarian border. It has been also occurring in the Mediterranean Sea where Catholics and Protestants have given life to the experiment of the humanitarian corridors that is imposing itself as a European sustainable and virtuous model to manage the arrivals of migrants in conditions of vulnerability.

In New York the reference to the concreteness of these gestures seemed somehow to have vanished. The narrative of the active action of believers and churches, that have ecumenically interpreted their testimony, didn’t quite emerge.

However, one of the merits of this Symposium has been the fact of valuing the stories of the migrants, who often travel with a small copy of the Bible or the Koran as well as some sacred objects of their tradition. The link between migration and religion becomes increasingly close and essential. We can notice it in our reception centres inside which we too often forget the spiritual dimension. In short, even the reception becomes post-secular.