Rome (NEV), 22 April 2018 – The Sala della Vaccara of the Palazzo dei Priori in Perugia was full for the panel entitled “Lights and shadows of the humanitarian corridors: functioning, perspectives and media representation”, held on Sunday evening, April 15th, as part of the XII edition of the International Journalism Festival.

The meeting was moderated by the journalist Laura Silvia Battaglia, who stressed the ecumenical value of the pilot project, born more than two years ago by the impetus of the Federation of Protestant Churches in Italy (FCEI), the Waldensian Board and the Community of St. Egidio. The discussion highlighted how the main stream media typically transmits the binomial “crime-security” narrative when it comes to migration issues, one that the humanitarian corridors project opposes through the “solidarity-security” narrative. Gaëlle Courtens, who spoke on behalf of FCEI, underlined this aspect while illustrating the genesis and the functioning of the project, which allows people in vulnerable conditions, to reach Italy thanks to an airlift. 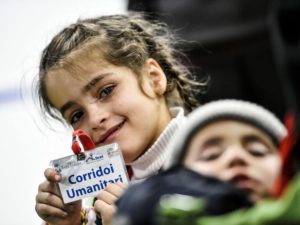 However, more than two years after the start of the project – after 18 flights from Lebanon, the establishment of a new humanitarian corridor from Ethiopia under the aegis of the Bishop’s Conference and the Community of St. Egidio, the launch also in France and in Belgium of similar projects – the idea that people in need of international protection can arrive by air thanks to a humanitarian visa, has not yet entered the collective imagination. This was recalled by Marta Cosentino, author of the documentary “Take me away”, who from Lebanon to Turin followed the Syrian Makawi family in this adventure. She also mentioned the data from the “Charter of Rome” report: the news on migration continues to only marginally treat good practices such as safe passage. For Marta Cosentino, the space granted by the media to stories and initiatives that propose alternative solutions to the “problem” of migratory flows, remains insufficient.

Gennaro Giudetti, a humanitarian activist who lived with the Operation Colomba in refugee camps set up by Syrians in northern Lebanon, in his testimony emphasized the human relationship that is established, when living in direct contact with those in need of everything. Giudetti still maintains contacts with a group of families welcomed in Trento. He accompanied them on the flight of February 29th 2016, from Beirut to Rome.