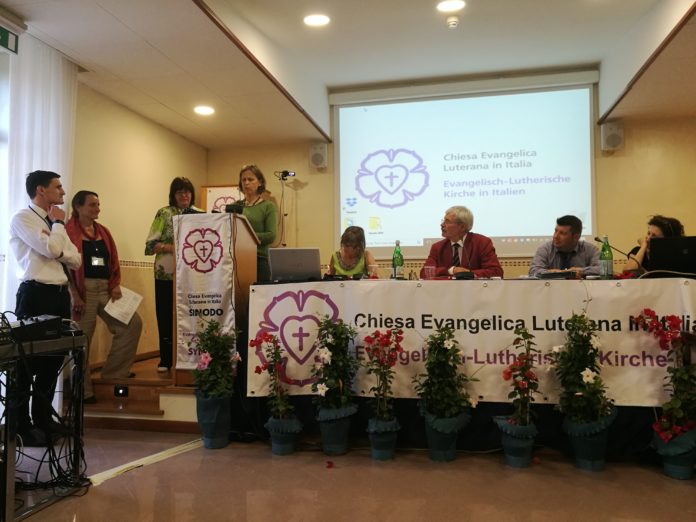 Rome (NEV), May 6, 2018 – The third session of the XXI Synod of the Lutheran Church in Italy (CELI) opened on Saturday 28 of April, in Rome. About fifty pastors and representatives of the local churches met up to the 1st of May, to evaluate the work of the Consistory – CELI’s executive body – and indicate the priorities for the next future, under the general theme “Quo vadis, CELI? – 501st, and now?”.

The Synod reelected Pastor Heiner Bludau as Dean of CELI. Bludau, a 62 years old German is currently the pastor of the Lutheran Community of Turin.

During the inaugural worship, attended by numerous Italian and foreign guests, a new pastor, Georg Reider, was ordained. Reider, 62 years old, belongs to the Lutheran community of Bolzano, is the founder of the Zentrum Tau for psychological and spiritual follow-up and training. He has been consecrated to the CELI’s “ministry of public preaching of the gospel in word and sacraments”, after a long personal journey: for 33 years he dressed the Franciscan habit and for 27 years he was a Catholic priest, before joining the Lutheran church in 2011.

During the working sessions, at the center of the debate was the identity and priorities of the church. In particular, four were the issues the Synod focused on: the CELI profile, its testimony and mission in Italy; the relationship between projects and resources; fundraising and social media.

A heartfelt and participated debate led to the decision to hand over the management of the nursery and elementary school “Jesus of Nazareth” of Santa Maria La Bruna, in Torre Annunziata (Naples). Founded in 1969, the school has always been managed by CELI through the local Lutheran church and has for many years seen the commitment of Pastor Paolo Poggioli as the school’s head teacher. With the retirement of Pastor Poggioli and because of too high costs, the Synod decided to cede the management of the school to the Padre Pio Onlus Association. “Of course, as Protestants, the name of this association made us jump”, explained Pastor Heiner Bludau, in his report to the Synod, “but, during the negotiations, and on occasion of the visit to a school run by this association, we received an excellent impression that convinced the Consistory to consider the transaction”.

The member and guests of the Synod had the opportunity to visit Rome on a very special “journey of solidarity”: on April 29th, lunch was offered at the Gustamundo restaurant (Valle Aurelia area), a gastronomic project, that aims to promote the integration and social inclusion of migrants and refugees who wish to make their work and their culture available to everyone. During lunch, some young guests from the Community of St. Egidio, from a reception center, and from the National Protection Service for Asylum Seekers and Refugees, told the guests their experience on the field. The group then made a stop at the BAOBAB Experience Onlus Centre (near the Tiburtina railway station), where about 180 migrants live in precarious housing conditions.

“Despite the limited time available, we tried to show the guests of this Synod a little-known Rome, but equally beautiful, capable of being welcoming and inclusive. We thought that the best way was to show the concrete results of those who work every day to help those suffering”, explained Daniela Barbuscia, in charge of the CELI diaconate.