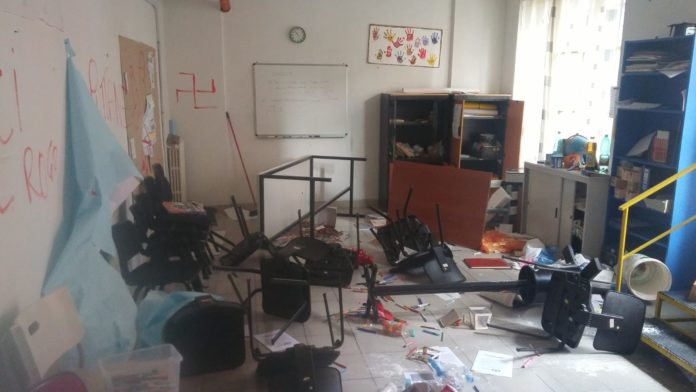 Rome (NEV), September 21, 2018 – “The Baptist Church of Milan, Via Jacopino da Tradate, has been supporting the work of Mrs. Carmen for many years. Carmen has been running the after-school program for the neighborhood, right next to our premises. Down the years, girls and boys of all nationalities in the area, have found in themselves, thanks to Carmen and her collaborators, the resources and the trust to continue their studies and enroll in high school, which is not entirely obvious here. On September 16, Carmen was supposed to start the new year’s activities, but when she opened the location she found it upside down. I went there too, together with the sisters and the brothers of our church. A mix of fascist and homophobe insults, whose highlight is ‘CARMEN A FOREIGNERS’ FRIEND’. Here is the insult, the ignominy. Carmen, a foreigners’ friend. Now we are going to add:  ‘the friendly to foreigners Church’. The Welcome Manifesto of the Federation of Protestant Churches in Italy is ready to be posted up at our door and local politicians will be contacted. Carmen has reported the incident. I hope the police will support her. Now we too, as a community, along with other churches in Milan, will activate, to testify to the neighborhood that Carmen, the girls and the boys are not alone. We are together”.

This is the post of the Baptist pastor of Milan, Cristina Arcidiacono, published on September 16, on Facebook, shared and commented hundreds of times also by churches of different Italian regions, from Palermo to Susa, from Civitavecchia to Bergamo.
In the meantime, volunteers and supporters of the School of Popular Culture have restored the location and tidied everything up. Among them, also some children.
“This is not the first time that such acts have occurred, the problem is structural and must be tackled as such”, Arcidiacono declared to the NEV agency.