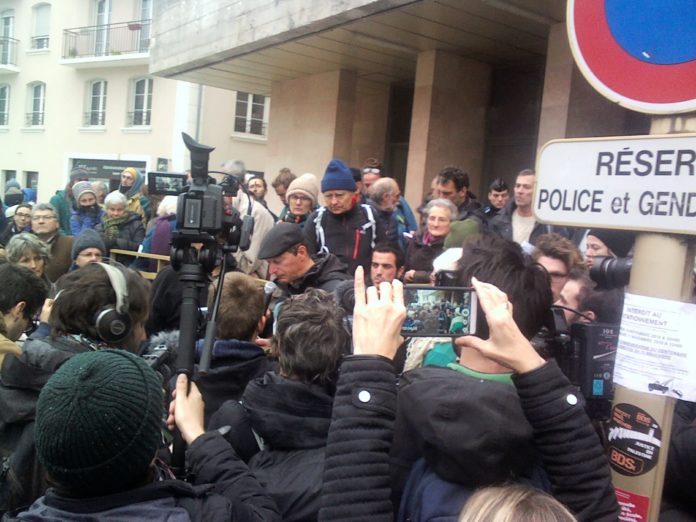 Rome (NEV / Riforma.it), December 21, 2018 – All the requests of the Public Prosecutor’s Office have been accepted and all the seven activists have been convicted of aiding illegal immigration for the crossing of the border between Italy and France during a demonstration in defence of the right of solidarity and in response to a sit-down organized by the extreme right-wing Génération Identitaire, last April 22, between Claviere (Italy) and Montgenèvre (France).

The activists had been accused because among them there were migrants who, in that way, crossed the border. Five of them, Benoit Ducos, Eleonora Laterza, Lisa Malapert, Theo Buckmaster, Bastien Stauffer, received a 6-month pending sentence, and the two others, Matthieu Berrullier and Juan Jalmain, were sentenced to 12 months, 8 suspended months and 4 to be paid for with a procedure to be defined.
The numerous people, about two hundred, gathered outside the Court, received the sentence with strong protests. Also present a large number of journalists, various non-governmental organizations and representatives of the Cimade, a French NGO with a Protestant background, committed to welcoming migrants and in the advocacy for the rights of foreigners.
Davide Rostan, Waldensian pastor of the church of Susa, engaged in giving assistance to those passing through the alpine routes, declared after the sentence: “A bad sign also because the event during which these people were arrested was not only in favour of solidarity and of people trying to build themselves a future, but also in response to a blockade made by a fascist group that has never been put under investigation. I remember that this extreme right-wing group for an entire week illegally patrolled the hill of Montgenèvre, stopping people trying to cross the border and delivering them to the police”.
“France has chosen the side of death and not that of solidarity – he continued -. The French Public Prosecutor has brought charges against persons who work to help human beings. We will continue to help the people crossing the border, as also happens at sea, because no one should remain alone and in the cold. This sentence follows the position of Europe at this moment. We should welcome people and try to establish a different economic justice; it is not possible to think of blocking this global phenomenon. Our Protestant tradition, linked to the Bible, tells us of Abraham who leaves and goes to Egypt to escape famine”.