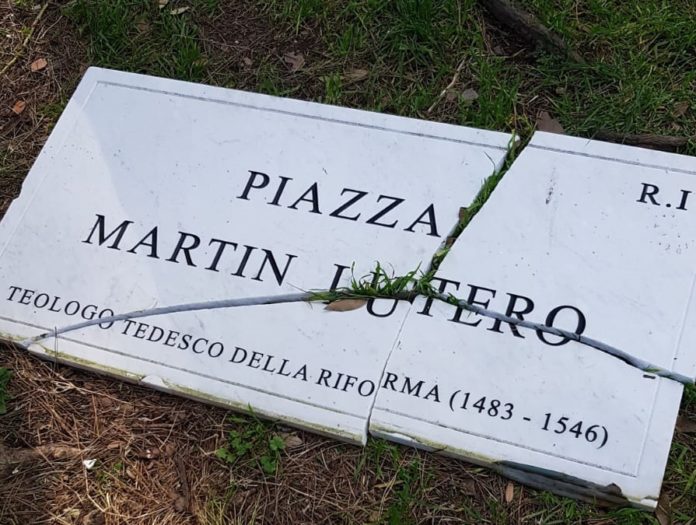 Rome (NEV), February 16,  2019 – “As Council of the Roman Protestant Churches*, having learned of the vandalism in Martin Luther Square, with the destruction of the square plaque, we condemn yet another episode affecting the religious minorities of our city.

Only a few weeks after the theft of the “stumbling stones” in the Monti district, not far from Colle Oppio (were the square is), this new event wounds the protestant churches that in Martin Luther find the inspiration for their community journey.

This act took place just before February 17, celebrated by the Italian Protestant churches and by the Jewish community, as a day of freedom. A day in which memory is made of that February 17, 1848 when King Carlo Alberto, signed the Patent Letters which extended the civil rights to the Waldensians and to the Jewish people.

As a religious minority we feel wounded in the founding values of our faith experience, by an act which demonstrates how our witness is still valid, liberating and, above all, relevant in the defence of freedom – not only the religious one – of every man and every woman in our Country.

We ask for a concrete commitment from the Municipal Administration in condemning this act and for the immediate restoration of the plaque in the park of Colle Oppio. We also ask that training and information programs be identified and implemented, at all levels, on the issues of respect and freedom of religious minorities, still at risk in our Country.

The Council board of directors

* The Council is a body in which the Adventist, Baptist, Lutheran, Methodist and Waldensian churches of Rome collaborate.