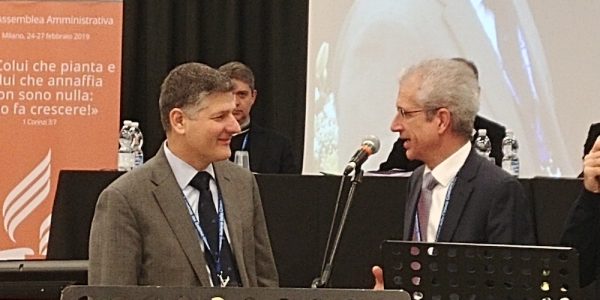 Rome (NEV / Riforma.it), February 28, 2019 – Pastor Stefano Paris will still be the president of Italian Adventists for the next five years, confirmed on  February 26, during the 26th Administrative Assembly of the Italian Union of the Seventh Day Adventist Churches (UICCA).

The 304 delegates gathered in Milan from all over Italy, for an intense four days of work, voted for Pastor Andrei Cretu as the new secretary of the UICCA in place of the outgoing Giuseppe Cupertino. Of Romanian origin, Cretu was consecrated to the pastoral ministry in 2010 after a five years trial period in the Romanian church of Rome. He was therefore in Mazara del Vallo, Montemargherita, in the Romanian-speaking churches of Turin and Milan. Since 2014 he has been the director of the ‘Campo Nord’ department.

The works were preceded on Sunday 24, by the consecration of a new pastor, Mihail Constantin Dinca, Romanian, 38 years old, graduated in 2011 from the Adventist Theological Faculty of Florence and currently serving in the communities of Monreale and Palermo.

Two new churches have joined the UICCA, Altamura-Gravina and Milano Certosa. While the historical community of Montaldo Bormida closed its activity. It was the first ecclesiastical building owned by the Adventist Union and  – as the outgoing pastor Cupertino recalled – “thanks to this it was possible to obtain the recognition of ‘worship body’, since 1929, year of the promulgation of the law on ‘admitted cults’”.