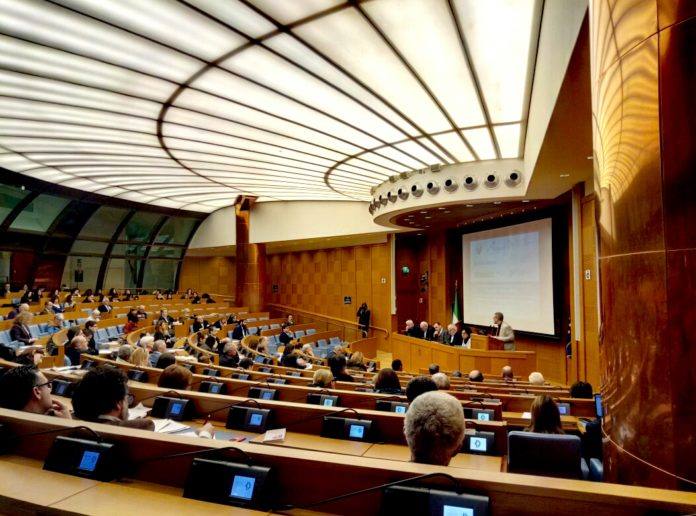 Rome (NEV), March 8, 2019 – “As president of the Federation of Evangelical Churches in Italy (FCEI), today represented here by the Globalization and Environment Commission (GLAM), I would like to offer you my personal greetings and best wishes. We need “weapons of justice”, as we read in the second letter of Paul to the Corinthians in chapter 6. The weapons of biblical justice are knowledge, patience, goodness, sincerity and love”. This was the greeting of Luca Maria Negro, FCEI president, at the conference entitled “Production and trade of armaments: our responsibilities”, held in Rome on March 1, at the Palace of the parliamentary groups.

The conference, organized by GLAM together with other organizations *, intended to promote the confrontation among representatives of the government and institutions, parliamentarians, trade associations, churches and civil society, on the subject of Italian production and trading of armaments with particular attention to the role and functions of each actor and to the responsibilities in the control of this sector.

After the panel discussions, the meeting ended with the production of a final document, in which the participants underlined the importance of having proposed to the public opinion, to the Government and to the Institutions, the issue of the production and export of Italian military systems in a moment of particular international tensions. The document asks the Italian Government and all the political forces to act at European and international level to promote a  real control on weapons trading and to re-establish clearness in international relationships and in information. Furthermore the meeting promoters commit themselves to dialogue with all institutional, financial, industrial and social actors, in order to promote a large reflection and a gradual reorganization of the whole section of the national arms production.

* Foundation for Ethical Finance, Political Movement for the Unity and Movement of the Focolare, Pax Christi Italy, Italian Network for Disarmament, National Office for Social Problems and Labour, the National Office for Ecumenism and Inter-religious Dialogue of the Italian Bishop Conference (CEI).