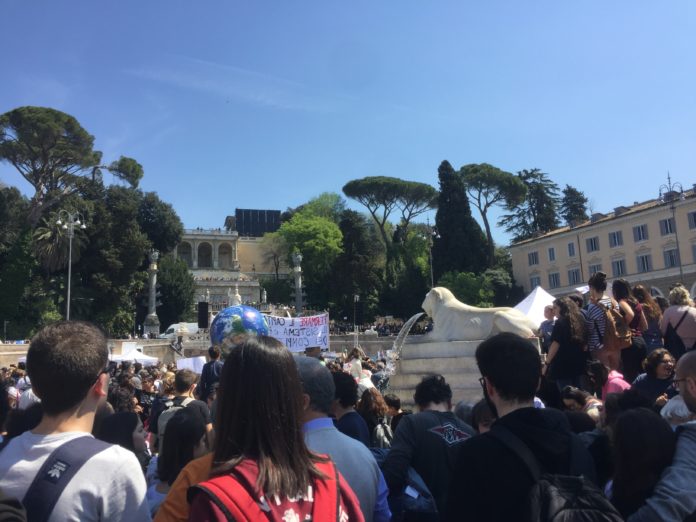 Rome (NEV), April 27,  2019 – 25,000 people, according to the organizers, gathered in Rome on April 19,  in Piazza del Popolo,  for the #FridaysForFuture and the meeting with Greta Thunberg, the sixteen year old Swedish girl who launched the climate school strike.
Many young Italian students spoke from the stand waiting for Greta, including a 9-year-old girl, the youngest participant in the event. She spoke in English.
Among the speakers, Marianna from Bari who requested the closure of Ilva (an Italian steelworks company), “which devastates the territory of Taranto”, hoping that from this very town in Apulia might “start a plan for the ecological transition. We want the city of Taranto free from poisons and blackmail”.
On the stage followed the musical group of the Têtes des Bois, creators among other things of the special “pedals stage”, in line with the super eco-friendly event, as it was powered by  the electricity produced by 128 bicycles and 128 young people  who rode since the early morning.
“It is not too late – said the young Swedish activist, speaking about an hour after the scheduled time – and everyone must decide which side to take. We are here because we have decided which side to take. We are told that we are losing school hours, but actually we are changing the world. This is why we will continue to fight for our future. Thanks Rome”.
Environmental issues have always been a priority for the Federation of Protestant Churches in Italy (FCEI), in particular through the action of the Globalization and Environment Commission.
And not surprisingly, the episode of  the Protestantesimo program, broadcasted on April 21st on the TV channel Rai2, was all about the young people who are on strike for the climate.