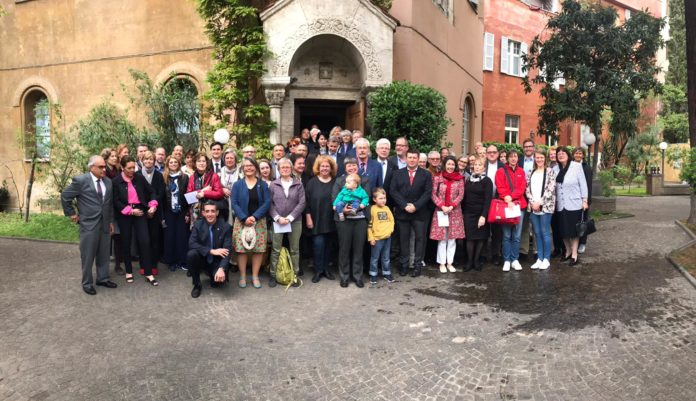 Rome (NEV), 29 April 2019 – The XXII Lutheran Synod was held in Rome from 25 to 28 April, an occasion also to celebrate the 70th anniversary of the Lutheran Evangelical Church in Italy (CELI). 56 were the delegates from the 15 communities distributed throughout the country. In addition to the usual work of a synod made up of reports, votes, budget approvals, distribution of the 8 x thousand funds, decisions on numerous diaconal activities, the objective was to lay the foundations for the future. Economic crisis, refugees tragedy, populist tendencies and new nationalisms, climate change and the profound crisis of the European institutions, are particularly intense themes also in Italy. CELI is just a small church but faces its responsibilities in society and makes its voice heard on all important issues.

The final declaration of the Synod is a position taken on how CELI intends to face its path towards the future with reference to the main theme of the meeting “Faith and Future – Faith and Action”:

The third day of the Synod ended with a reception at Villa Aurelia in Rome to celebrate the 70th anniversary of the foundation of CELI, while on Sunday 28th April, the Synod ended with a solemn worship in the church of the Evangelical Lutheran Community of Rome. During the celebration there was a farewell to the three pastors Franziska Müller, Friedemann Glaser and Urs Michalke.

________________________
The Evangelical Lutheran Church in Italy, CELI, gathers 15 communities spread over the entire territory of the peninsula. A community in the diaspora that has only a few thousand members and does not have large movable and immovable assets. Being small, however, does not mean being irrelevant. On the contrary, the Lutheran Evangelical Church in Italy is very active in many areas of social issues, solidarity and culture with various projects and programs that go far beyond the territory of each community. Immediate help for migrants and people in need, issues such as equal opportunities, environmental protection, fight against discrimination … It is a church that makes its voice heard in society, which does not hold back and intervenes on all the burning topics of current events of political, ethical and religious nature. This is also possible thanks to the 8xmille shares that many Italian taxpayers allocate each year to CELI.