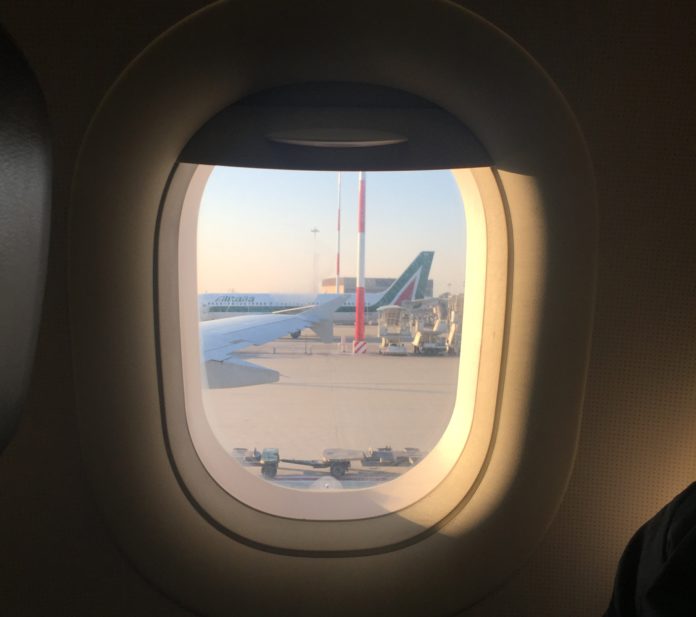 Rome (NEV), 17 April 2019 – The “Lo sguardo dalle frontiere” (A Look from the Border) editorial is written by operators of Mediterranean Hope (MH), the migrant project of the Federation of Protestant Churches in Italy (FCEI). This week’s “Look” comes from the House of Cultures in Scicli and is the result of a series of conversations between Fatima and MH operators, Mauro Covato and Ivana De Stasi.

“Tajara” is the Syrian Arabic word for “plane.” I had never been on a plane before departing for Rome: a two-hour flight that took me, my mother and my two brothers from Beirut to Italy through the humanitarian corridors. I was used to seeing very different planes, ones that didn’t carry people and dreams but bombs. I saw them for the first time in 2011, they flew over my city. Idlib is a small Syrian city immersed in the countryside, surrounded by wide fields filled with olive, pomegranate and fig trees that I thought were exclusive to my region and instead, to my great surprise, I discovered also existed in Scicli, where I have been living for a few months at the House of Cultures.

One night in June, we were in the middle of Ramadan and it was very hot, a series of bombs, I don’t remember how many but certainly too many, continued to fall one after another non-stop. It all happened in a matter of seconds, seconds of terror for me. We left our house because we were afraid the building would collapse. My mother took my brother, me, and my younger brother with her, as well as my uncle and his family. Only afterwards did we realise that my grandmother had been injured by the “rain of iron”: that’s what we called the splinters caused by the explosion of the bombs.

They were small but very dangerous and often lethal. My uncle, who was busy protecting the children, told me to use a knife to remove the splinters from my grandmother’s body. Luckily, they had only entered her arm.

What we missed the most during the war was the routine of everyday life. Everything was complicated: getting food and water was a big problem, even going to the bathroom was risky because you never knew who could be hiding behind the bushes. Walking in the street was the greatest danger and not only because of the snipers but also because of the military and the rebels who would stop and ask you which side you were on: the rebels or Bashar. Any answer you gave was a death sentence.

At the end of 2013, my mother decided that we had to try to save the only thing we had left, our lives. We crossed the border into Lebanon illegally, even travelling long distances on foot. I remember that we ran without ever looking back, placing all our hopes on arriving in Lebanon. We lived for almost five years in a refugee camp in the north of the country. They were very difficult years lived in illegality and with the struggle of trying to find medical treatment for my brothers’ illness. In Lebanon, we met people who wanted to help our family and who suggested that we go to Italy to seek medical care for my brothers. Despite, the immense fear of once again abandoning a place that was dear to us, we decided to leave. We arrived in Italy on 31 June 2018.

With our trip to Italy thanks to the CU, the plane that we were once afraid of now became the symbol of our salvation, and also the beginning of a new life. The war has taken away my home, my father and my childhood, however, unexpectedly, there was a positive aspect: I discovered the existence of countries other than mine, I have met lots of people, my brothers are being cared for in the hospital of Ragusa. In addition to the amazement in having found the same trees that surrounded Idlib in Scicli, there were also several other amazements: I am attending school for the first time and I discovered that I love studying languages and mathematics, I can walk through the streets of Scicli alone without anyone asking me which side I am on. I can drink a coffee at the bar and I can do it whenever I want, simply because I am free to do so.

This is Fatima’s story, as told to the operators Mauro Covato and Ivana De Stasi.