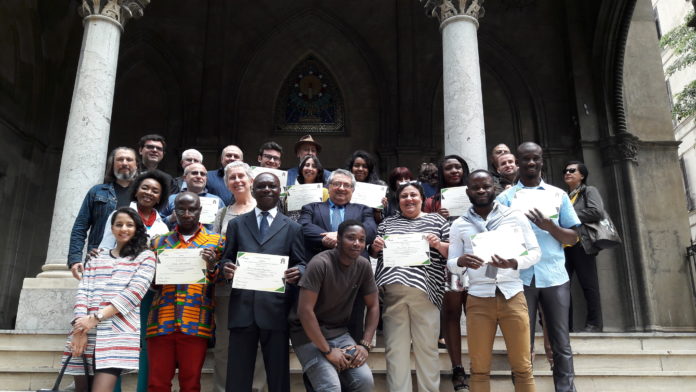 Rome (NEV), June 7, 2019 – On the 2nd of June in Palermo, the path of the cross-cultural Training and Hospitalization Laboratory (LINFA) promoted by the Federation of Protestant Churches in Italy (FCEI) as part of the program Being church together (ECI), came to an end. “LINFA is a training course aimed at preparing local preachers, monitors, youth leaders, cultural mediators and people who provide a service within intercultural contexts, as for example, the protestant churches in Italy,  more and more often involved in this field”, said  to the NEV Press agency, Francesca Cozzi – pastor and theological animator who accompanied the workshop during its two years of work.
The course was devised by a group of experts, and in particular was supported by the collaboration of professors Eric Noffke and Yann Redaliè of the Waldensian faculty of theology, professor Paolo Naso of La Sapienza University of Rome and pastor Anne Zell. The latter  cooperated with the Master’s degree in intercultural theology, promoted by the Waldensian faculty, which recently concluded its first edition.
“The specific feature of LINFA is that it does not include traditional lectures – continued Cozzi – but, taking into account the different level of preparation of the participants, and of the linguistic difficulties that in some cases remain, privileges formulas of group animation, popular education and cooperative learning. The main work takes place above all in the groups, with a theological animation that allows everyone to express him/herself. Respect, exchange and transparency in relationships are the basis of our whole journey”.
A two-year excursion that focused on the different issues emerged from the experience of Being church together, the FCEI program launched in 2000 to address the growing presence of evangelical migrants in Italy.  In the meetings of LINFA issues such identity, proactive solution of conflicts, integration and citizenship, young people and generations, ethics, spirituality, mission, how we read the Bible, church and ministries, were dealt with.
“It was a very interesting course – concluded Cozzi – which allowed us to create a cohesive and open group, a network beyond our own confession, with very strong moments of exchange and also of dissent that we have always recomposed with a purposeful and open attitude. The challenge for the future is that of enhancing our students in local communities also through tutors. What we have learned is that the relationship among us must be like the relationship between brothers and sisters, based on sharing prayer and worship. This is how conflicts are solved”.
On Sunday June 2, 21 diplomas were awarded. In the coming months the LINFA commission will meet to assess the work done and to organize the new cycle that will start in 2020.