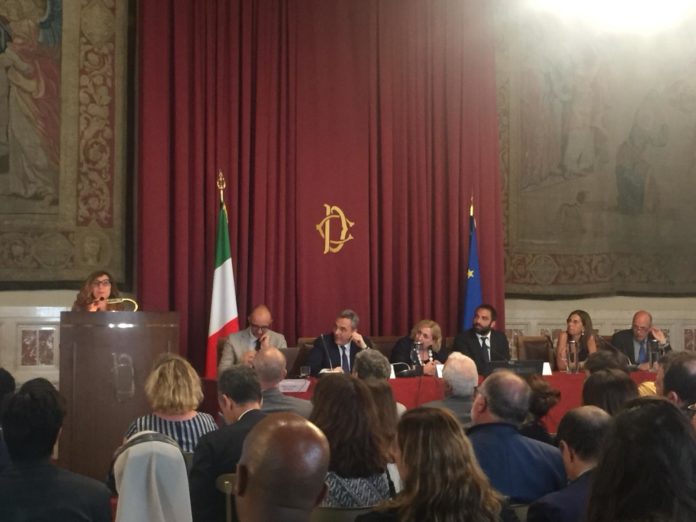 Rome (NEV), 1 July 2019 – Humanitarian Corridors land at the Chamber of Deputies. This morning, in the Sala della Regina in Montecitorio, a meeting was held entitled “Humanitarian Corridors – For a Solidarity-based Europe,” promoted by Giuseppe Brescia, President of the Constitutional Affairs Committee of the Chamber, together with the bodies that created the Humanitarian Corridors, the Community of Sant’Egidio, Federation of Protestant Churches in Italy and Caritas Italia. The initiative was attended by Emanuela Del Re, Deputy Minister for Foreign Affairs, Olivero Forti of Caritas Italia, Marco Impagliazzo, President of the Community of Sant’Egidio, Luca Maria Negro, President of the Federation of the Protestant Churches of Italy (FCEI). The debate was moderated by Alessandra Ziniti, journalist from the Italian newspaper, La Repubblica.

The President of the Chamber of Deputies, Roberto Fico opened the meeting by saying that “the corridors are a virtuous example.” He also said that it is important to “share the responsibilities and burdens of those who arrive in Europe, especially by sea. It is necessary to establish that whoever arrives in any Member State, whether refugee or migrant, must be taken care of by Europe as a whole and this requires overhauling, not simply revising, the Dublin Regulation by abandoning the current principle “of the Country of first landing” and the automatic redistribution among all European countries.”

Therefore, the humanitarian corridors initiative is increasingly convincing. This was also reiterated by the Deputy Minister of Foreign Affairs and International Cooperation, Emanuela Claudia Del Re, who reminded everyone of the ability of the corridors to “comprise a life project for migrants.” According to Del Re it is necessary to “Act now: humanitarian corridors to safely and legally transfer tens of thousands of vulnerable migrants out of Libya. It can be done, it must be done, towards Italy and Europe. Now is the time to act.”

Act, however, in an apparently more hostile context. Oliviero Forti of Caritas Italia recalled that “the perception of migration is the conviction that migrants account for 25% of the population, but in actual fact it is only about 8%.”

The corridors can also represent a symbolic model, to reverse this tendency to misrepresent the migration phenomenon and its impact on the native population: “Italy knows how to welcome and integrate,” said Marco Impagliazzo, president of the Community of Sant’Egidio. “There is generosity and humanity. Every day we see the positive impact of humanitarian corridors: villages that are reborn, families and organisations that are integrated. This is affirmed in the highest place of our democracy: Parliament.” For this reason, said the representative of Sant’Egidio, a proposal was launched for a single, large European Corridor to evacuate Libya and grant at least 50 thousand visas. A Project that just recently has also garnered interest and positive feedback from the Prime Minister Giuseppe Conte.

The implementation of the corridors is a very strong and clear request by the Federation of Protestant Churches in Italy. Because it is a matter of choosing “morality,” explained the president Luca Maria Negro, who believes “not in walls, but in bridges, not in primacy of people but in justice. This is where morality lies: however, it is not always in the law.” The president of FCEI then made explicit reference to the Sea Watch affair and to the criminalisation of NGOs: “the good Samaritan does not turn the other way. We do not accept that a “good” reception like that of the humanitarian corridors, is pitted against a “bad” one, of those who save lives at sea. If there are no legal ways to seek asylum or to enter, thousands of people will turn to illegal routes.”