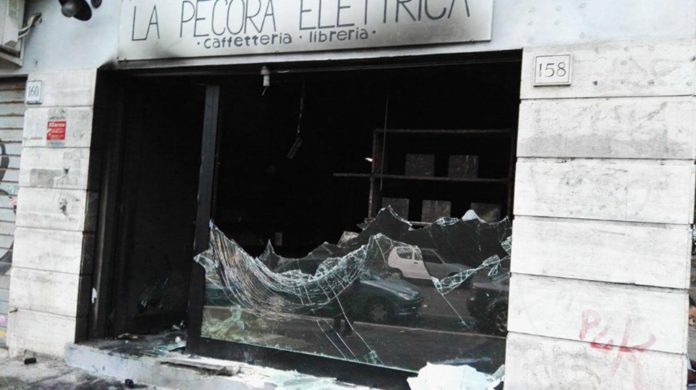 Rome (NEV), November 9, 2019 – “The first reaction to this latest fire is the difficulty in understanding the reason for this gesture”. This is how Herbert Anders, pastor of the Centocelle Baptist Church, commented on the new attack on ‘La Pecora elettrica’, a bookshop-cafeteria, a declared anti-fascist place in the popular area of ​​Centocelle, destroyed by fire on November 5.
“All our solidarity and closeness to this important area of ​​aggregation in our neighborhood and to those who take charge of carrying it forward – continued Anders -. Many people of our church had already joined the fund-raising for the reconstruction on the occasion of the first fire and I believe that we will mobilize again in the forms to be decided”.
The site had already suffered an arson last spring, on the night between 24 and 25 April, and just on November 6, it would have had to reopen its doors after a crowd-funding campaign and the mobilization of the entire neighborhood.
“My impression is that Centocelle is not such a radicalized and violent neighborhood as it would appear from these actions – said Pastor Anders -. And my incredulity makes me also think that perhaps we are traveling in closed compartments in which we only encounter our fellow human beings and never those who think differently from us”, he reflected.

The bookshop is a place of aggregation, of culture and solidarity; point of reference for the work of the neighborhood committee for the regeneration of the nearby park; a co-working space for meetings, presentations and theatre performances.

“Centocelle is a neighborhood that has always been active on the cultural field  and for social aggregation. I believe it is fundamental to respond to this violence by listening and talking to people. A dialogue that we have been trying for a long time to carry on with the Catholic parish, the mosque and the social forces of the neighborhood”, concluded Anders.