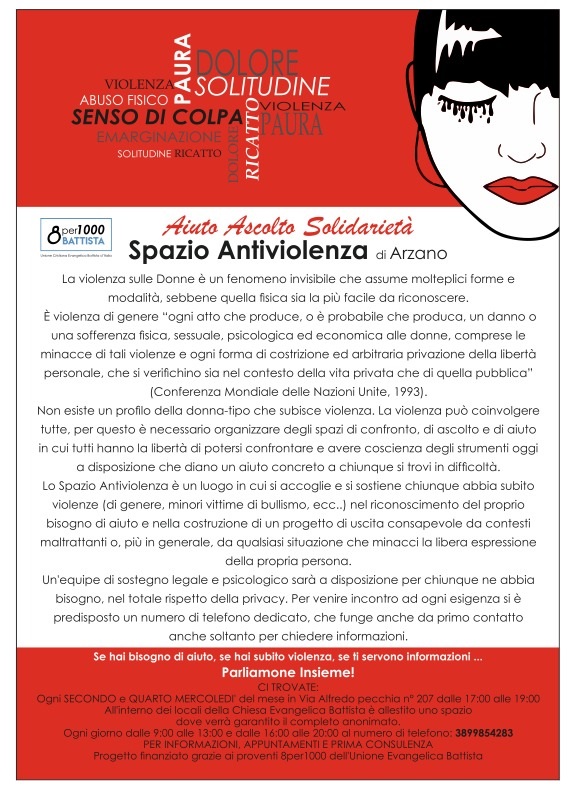 Rome (NEV), November 23, 2019 – “Arzano is a difficult area”, says Rosetta Uccello of the local Baptist community: “here in the 1990s the drug began to spread, causing a high concentration of drug addicts also linked to the development of large drug market places in the surrounding areas; next to the borders of Arzano we find in fact both Scampia and the “Third World” area belonging to the Secondigliano district, unfortunately known for the diffusion and sale of hard drugs such as heroin and opiates in general, actually considered among the largest drug market at European level”.
In addition to the problems related to crime, the church of Arzano finds itself operating in a context of social and economic decline and of the employment crisis generated by relocations and mass layoffs: “the inherent discomfort in the territory not only penalizes women in their job search and therefore in their self-determination, but it creates a “culture” that reduces to “normality” violent behavior and oppression against women, still considered as a “release valve” of man’s frustrations”.
And it is in Arzano that, with the Eight per thousand of the Income tax funds of the Christian Evangelical Baptist Union of Italy (UCEBI), an anti-violence desk was opened to offer follow-up, support and legal protection for women and children victims of violence. The project also aims to promoting cultural and information initiatives, moments of exchange and debate between the people of the neighborhood.
“The main objective of the desk – continues Uccello – is to provide, while maintaining absolute anonymity, a place where every woman in need of being listened to and of having a point of reference, can apply. The help desk does not want to focus only on gender-based violence, but also wants to be a promoter of social inclusion, offering contacts with municipal and territorial bodies and structures that can support women, children and anyone who needs help according to her/his condition. It will be a space of connection between the Baptist evangelical church and the needs of the weaker groups”.

In the project, besides Rosetta Uccello and the volunteers of the Arzano Baptist Church, will work also the psychologist Francesca Di Vito and the lawyer Antonella Distefano.
The Antiviolence Space will be presented in Arzano on November 25th, during an evening dedicated to women, “To say every day NO to violence against women”, attended by pastor Gabriela Lio, president of the Federation of Protestant Women in Italy (FDEI). On the occasion pastor Lio will also present the “Thursday in Black”campaign; Prof. Claudia Angeletti of FDEI will participate with a report on “16 days. Raising awareness of gender-based violence”; Serenella Syriac, former magistrate at the Criminal Court of Naples, author of “The woman and the judge”, and G. F., a victim of violence, will bring their testimonies.