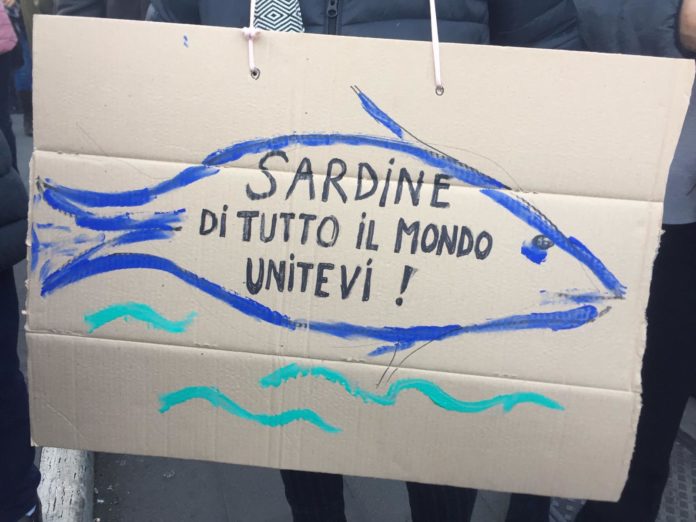 Rome (NEV) December 21, 2019 – Even protestant representatives in Piazza San Giovanni at the national event of the sardines movement. On Saturday 14 December, several members of the Protestant community took part in the great mobilization in Rome.
Among them the pastor of the Baptist church of Trastevere, Ivano De Gasperis, secretary of the Evangelization department of the Evangelical Christian Baptist Union in Italy

(UCEBI). “I totally recognize myself in the requests and in the proposals of the sardines. They all seem to be perfectly shareable. It is a movement of civilization that recalls politics to its duties, after the grotesque show of perennial electoral campaign in recent years. Opposition to the climate of hatred and fear is the glue of this square and this protest. The response of many thousands of people seemed surprising to me, a genuine form of popular expression and civic manners”.
After filling Piazza San Giovanni, the future of sardines, a movement born in Bologna in opposition to Matteo Salvini, is all to be written. “As the Gospel says, you are salt and you are leaven – concludes the Baptist pastor -. I expect sardines to be somehow a yeast and to remain this, a fruitful yeast, a wind able to stir the world of politics and culture, for too long outside and far from the squares”.

Living Lent in a climate of change

February 16. The Bonfire in streaming for the Freedom Day

Hate online, yet another anti-Semitic attack. The condemnation of the Lutheran Church

A master in “Religious freedom, freedom of conscience, rights and religions’ geopolitics”