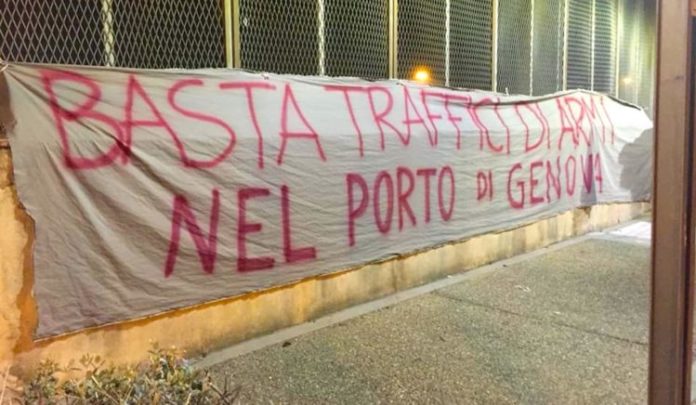 Rome (NEV), February 26, 2020 – Following the letter of the Autonomous Collective of Dock Workers (CALP) of Genoa, Antonella Visintin of the Environment and Globalization Commission (GLAM) of the Federation of Protestant Churches in Italy (FCEI) drew the attention to the economic supply chain that feeds war throughout the Middle East.
“The territorial surveillance of dock workers needs to be supported by those who think that peace is built with justice – said Visintin – and, therefore, also with respect for the law relating to trade with Countries at war and the Italian Constitution. Besides the support there is also the need of a concrete commitment for the conversion of the war industry”.
There are several pacifist and non-violent realities, including the Centro Studi Sereno Regis of Turin, which are supporting the mobilization started by the dock workers who, in recent months, as stated in the letter, have “prevented the embarkation of war material directed to Saudi Arabia and destined for the war in Yemen. Similar demonstrations in support of the arms trafficking block were held in other European ports (Le Havre, Marseille, and even earlier in Bilbao)”.
“The winds of war, however, have not stopped – continues the letter from the CALP – as the dramatic developments related to the wars in Syria, the Libyan conflict and the US aggression in Iraq, very well demonstrate. They are bloody conflicts that daily reap victims, devastate territories, push thousands of people to abandon their countries and to migrate. The military industrial complex is among the many responsible subjects for this escalation”.
The Bahri Yanbu, a ship loaded with weapons, should have arrived on February 12 at the port of Genoa, but at the moment according the Vessel Finder app it is off the coast of Portugal. Meanwhile, the workers continue the mobilization by calling “the whole city in solidarity to join us to block yet another death traffic” in the name of peace between peoples.