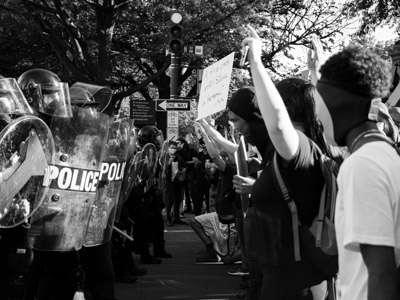 Rome (NEV / Chiesavaldese.org), June 13, 2020 – The Moderator of the Waldensian Board, Alessandra Trotta, wrote to the President and Secretary General of the National Council of Churches of the United States (NCCUSA), Jim Winkler, thanking him for his message of  May 29th last, concerning the racial crisis in the USA. An incisive message in which Winkler compared two infections, CORONAVIRUS and racism: “There is still no vaccine for racism and white supremacy  so widespread in our society. There is still no cure. As Christians our fight against this evil, which sees us all united, continues”.
The moderator, in her letter, expressed the full support of the Methodist and Waldensian churches in Italy in breaking down the racial discrimination that is a source of division for the community of God’s creatures. Waldensians and Methodists, in fact, still retain a vivid memory of the persecutions of which they were victims due to similar ideologies.
“As you know – writes Trotta – our churches are strongly committed to promoting the vision of an open and pluralistic society as well as a policy of real and positive integration of migrants, based on a new citizenship pact to allow people from different backgrounds to be fully involved in the development and use of their talents for the well-being and peace of the country in which they have come to live and seek a better future. In this context, we support many programs aimed at promoting fair and effective laws, respectful of the human dignity of migrants and refugees, such as the Mediterranean Hope program of the Federation of Protestant Churches in Italy”.
The moderator, while recognizing the diversity of contexts, notes the similarities between the terrible events of Minneapolis and the experience of many migrants in Italy and Europe. In both cases the latter, even though they are part of our societies and working with us and for us, remain second-class citizens with less rights, security and protection.
“As believers – concludes Trotta – we are not only called to condemn any biblical justification aimed at supporting theories and practices of discrimination, but to be witnesses of being one in Christ, who breaks every cultural, racial and ethical barrier and unites us in a circle of love”.

Solidarity with partner churches in the US has also been expressed in recent days by the Standing Committee of the Action of the  Methodist Protestant Churches Churches in Italy (OPCEMI). The Methodist Committee refers directly to the Bible: “There is neither Jew nor Greek here; there is neither slave nor free; there is no male or female; because you are all one in Christ Jesus “(Galatians 3:28) and affirms that “racism is a sin”and that “women and men all have the same descent, since ‘He took from one only all nations of men to dwell on the whole face of the earth’. (Acts 17:26)” .