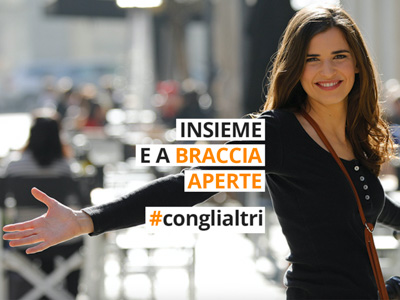 Rome (NEV), June 19, 2020 – “Together and with open arms”: this is the slogan of the campaign for the Eight per thousand in favor of the Waldensian and Methodist churches that started in recent days. The television advertisement refers to the support of “those who cannot make it on their own” and of “those who are left behind”, as well as to the commitment to “health and the quality of life” and “for the planet”. The voice is that of the actress Lella Costa who also this year wanted to contribute to the realization of the campaign for the “other eight per thousand”, as the claim says.

“With this campaign we want to emphasize that we use the Eight per thousand received by the State, together with others, – explains the moderator of the Waldensian Board, deacon Alessandra Trotta – to build relationships with associations and groups of the civil society that propose to us quality projects, both in Italy and abroad, to overcome obstacles in accessing to fundamental rights such as health, education, housing, and to increase full relationships and active and responsible citizenship; but also to expand the opportunities for cultural growth and the progress of critical thinking, or to protect the environment and promote a sustainable development”.
An important portion of the funds raised will be allocated to the Covid19 emergency in the recovery phase. 8 million Euros have already been allocated for this purpose, and in part have already been used, in the most critical phase of the epidemic. As it is known, not one Euro of the eight per thousand to the Waldensian and Methodist churches goes for religious purposes, while a large part of the funds received is invested in projects managed by non-evangelical associations and largely referable to other components of the Third sector. “It is our way – concludes the moderator – to work together with others, in that spirit of openness, sharing and dialogue that we want to identify us”.