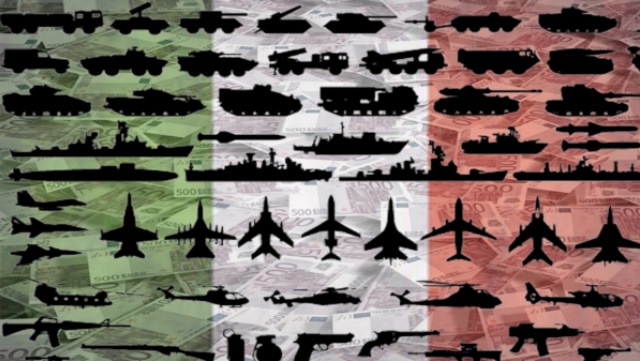 Rome (NEV),  July 19, 2020 – Almost 100 billion euros in military exports. These data emerged during a press conference held  in Rome on July 9,  promoted by the Italian Disarmament Network,  which includes also the Globalization and Environment Commission (GLAM) of the Federation of Protestant Churches in Italy (FCEI), together with the Peace Network.
The conference was held on the occasion of the thirtieth anniversary of the approval of Law 185/90 which regulates military exports (named “New rules on the control of export, import and transit of military materials”).
The  promoters write: “In these 30 years, exports from Italy for armament materials were authorized for a value of 97.75 billion euros at current values ​​(which become 109.67 billion euros with the recalculation at constant values ​​in 2019)”. They consider Law 185/90 to be “an advanced and innovative law in principles and mechanisms, but it has lost much of its effectiveness due to incorrect modifications and applications”.
“The situation of distance between the principles of the Law and its application – writes the Italian Disarmament Network -is well outlined by the data”. Both in the  Chamber of Deputies and in the Senate, the Government report on export 2019 is being discussed in these days: “It had not happened for years and this is therefore a sign of renewed attention to this delicate issue”.
The Italian Disarmament Network and the Peace Network ask to be audited by the Parliament to make their contribution to the debate, also in the name of the “continuous and growing loss of transparency” on the matter.