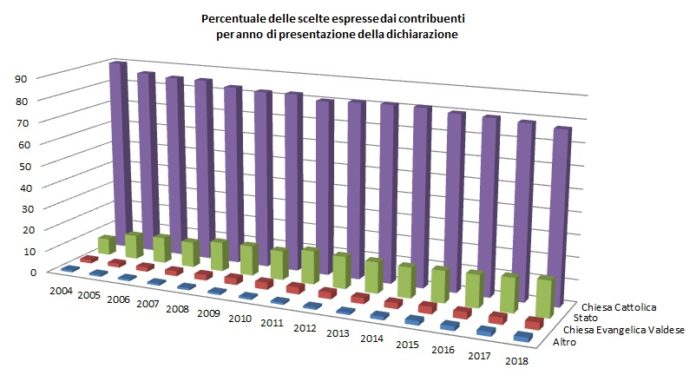 Rome (NEV), July 19, 2020 – In a summary document, the Ministry of Economy and Finance, on July 10th,  disclosed the statistical analysis relating to the funds of the Eight per thousand of the Income Tax. In the report, in addition to the indication of the years of payment relating to the revenues, respectively, from 2004 to 2016, the breakdown deriving from the Eight per thousand of the Income Tax and the choices expressed by taxpayers, with the amounts paid to the State and to the various churches and religious organizations (Catholic, Adventist, Assemblies of God, Waldensian and Methodist, Lutheran, Jewish communities, Baptist, Apostolic, Orthodox, Buddhist, Hindu, Soka Gakkai).

The NEV Agency reports below some data relating to the Eight per thousand for churches belonging to the Federation of Protestant Churches in Italy (FCEI).

WALDENSIAN EVANGELICAL CHURCH (UNION OF METHODIST AND WALDESIAN CHURCHES)
The choices expressed by taxpayers for 2016 revenues, distributed in 2020, were 547,915. The relative amount is almost 43 million euros. The trend of the choices made to allocate the Eight per thousand to the Waldensian and Methodist churches has undergone, as per all the others, some fluctuations with a slight decrease as regards income in 2017, the percentages of which will be paid next year, to go up again for 2018 income (amounts payable from 2022).

LUTHERAN EVANGELICAL CHURCH IN ITALY (CELI)
The choices made by taxpayers to allocate the Eight per thousand to Lutheran churches are, for the 2016 income paid in 2020, 29,330 for an amount of just over 2 million euros. The figures remain fairly constant over the years, except for the 2014 exploit with over 60,000 choices made.

CHRISTIAN EVANGELIC BAPTIST UNION (UCEBI)
For Baptists, who have only begun to perceive the Eight per thousand funds in recent years, the figures are as follows. For 2016, 16.574 expressed choices for a total of 1 million and 355 thousand euros. Signatures are slowly but steadily growing, also for the following years.