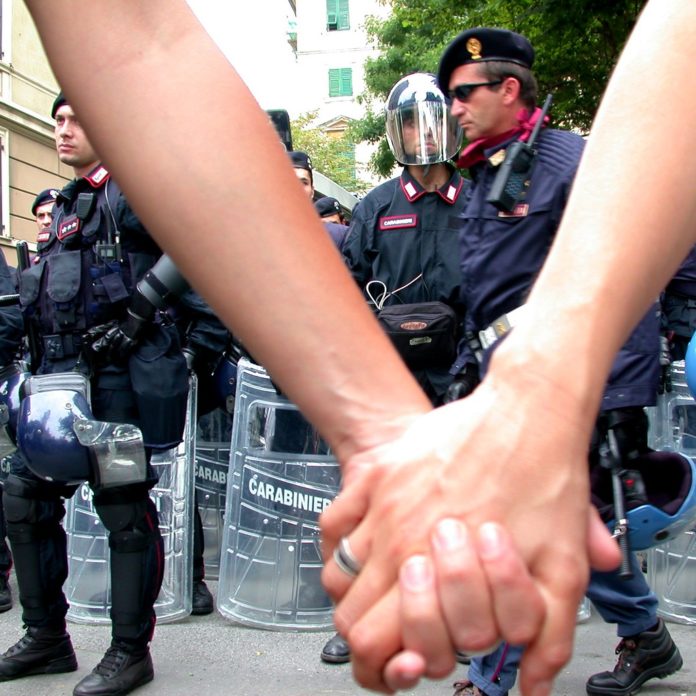 Rome (NEV), July 26, 2020 – “It was important to be there”. This was what the Nev agency said about the G8 in Genoa on July 25, 2001, taking from the evangelical weekly Riforma the words of Luca Monaco,  then-president of the  Federation of Protestant Churches of Liguria and Piedmont.
Those Protestant churches that had chosen to be in the streets, in the Ligurian capital, together with the alter-globalization movement which today celebrates that anniversary and recalls the assassination of Carlo Giuliani, killed on 20 July 19 years ago.
“The World social forum – explains Antonella Visintin, coordinator of the Globalization and Environment Commission (GLAM) of the Federation of Protestant Churches in Italy (FCEI) – at that time had managed to gather widespread concern regarding the aggression of neoliberalism, a position that had the support also of the Italian moderate world. In 1997 the World Communion of Reformed Churches (WCRC)  had begun “a processus confessionis, towards neoliberal capitalism which ended in Accra in 2004. GLAM in those years interacted with this path and  produced, among other things, a specific contribution to the processus“.
The coordinator of the FCEI Commission that deals with globalization and environment issues was at the time the pastor Franco Giampiccoli. “He had strongly believed and wanted to be in Genoa. We knew it was going to be dangerous, but we thought it was right to participate. We were about thirty people,  – continues Visintin -. Fortunately, our group was not directly involved in the “massacre”. I personally, however, found myself in another part of the procession, I had to run away and I eventfully reached home”.
“That experience still lives in the path that GLAM has continued to follow, together with those who question this model of economy and the values ​​that legitimize it. Some pieces of the Christian world continued to follow the Social forum, choosing the “bottom-up” mode, typical of the season of social forums, as the modus operandi of their daily commitment. The issue of climate justice, in particular, already brought to public attention by the young people of the Fridays for future, has been amplified by the health emergency: COVID-19 has recreated the same feeling of being on the brink of an abyss, which had brought many movements in the square in 2001. Today, as then, there is a demand for change which,  more than ever, represents itself: let’s start from there, let’s update the Genoa reasons. Let’s talk about the instances of that movement,  trying to reassemble those struggles to affirm the need for a structural change in society, a change in consciousness, and return to a demand for care, justice, equity. If we put together the struggle of the young people for climate justice, the demonstrations against racism in the United States, the  protests against poor and precarious work and so on, we would still fill Genoa with crowds – concludes Visintin – and ideally it would be as if we were back there, to demonstrate for another possible world”.