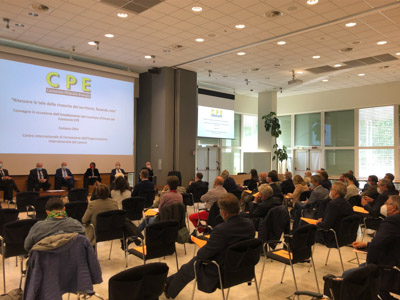 Rome (NEVCS44 / chiesavaldese.org),  October 18, 2020 – The “Consorzio Pinerolo Energia” (CPE – Pinerolo Energy Consortium), created with the aim of fostering synergy between enterprises, educational and training institutions, municipalities and secular and religious associations present in the Pinerolo area, has a new Honorary Committee which sees, among others, the presence of the moderator of the Waldensian Board, Alessandra Trotta.

Over the last three years, the Consortium has given life to numerous activities for the revitalization of the territory as a growth engine. Among its initiatives we recall “Let’s share together”, promoted by the trade union organizations CGIL, CISL, UIL to tackle the problems arising from the COVID 19 health emergency and the project of the “Pinerolese energy community”, the first new generation Italian energy community, which led to the establishment in 2019 of the first Oil Free Zone in Italy, called “Sustainable Territory”. In terms of employment in the area, there was the establishment of a work and mutual aid desk between companies to give a quick solution to cases of redundancy of human resources.
“I very gladly accepted to join this committee –  Trotta declared – because the ability to intertwine different experiences by favoring the comparison of ideas in the common search for solutions capable of helping an area to emerge from the crisis belongs to the tradition of the Methodist and Waldensian churches. For the believer and for the churches it is a question of bearing witness to one’s presence within the framework of an active citizenship, taking care of the common good starting from one’s own local dimension. Of course, without forgetting the global entity of the problems whose solutions require an open and non-localistic view”.
The Waldensian Diaconate is also part of the CPE  and participates in various working groups.
The other members  of the CPE, besides the president Francesco Carcioffo, are: the bishop of Pinerolo Derio Olivero, the rector of the Polytechnic of Turin Guido Saracco, the general director of  health unit ASL TO3 Flavio Boraso, the industrialist Mario Damilano, president of the Mineral Waters ‘Ponte Vecchio’.
The Honorary Committee of the CPE Consortium took office on  October 10,  in Turin, at the headquarters of the UN Campus, during a conference entitled “The rebirth of the territory in the Pinerolo model”.