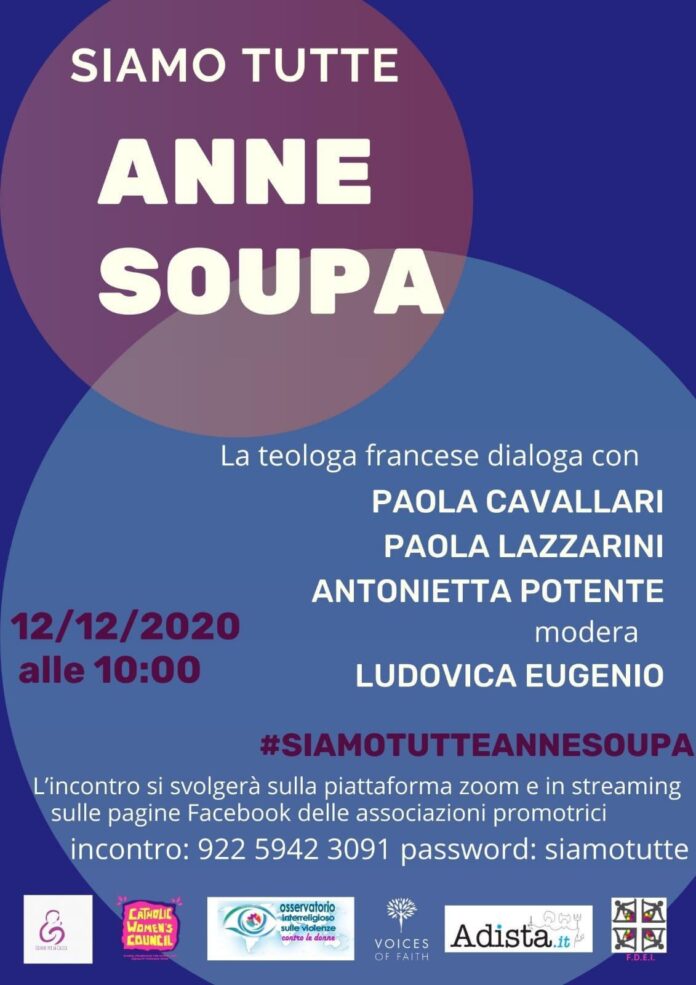 Rome (NEV),  December 12, 2020 – The Interfaith Observatory on Violence Against Women (OIVD) organized  a meeting entitled “We are all Anne Soupa” for 12 December, taking up the words of the statement launched last June.

OIVD’s president Paola Cavallari told the NEV agency: “In June, – the Federation of Protestant Women in Italy (FDEI) and  the OIVD edited the press release ‘We are all Anne Soupa’,  to support the biblical scholar’s candidacy for the bishopric of Lyon. Her candidacy has now been rejected, but it represented a gesture greeted enthusiastically by many Christian women who hope for an end to their exclusion from the ordained ministries of the Catholic Church and read it as a strong signal of their desire to exercise responsibility in the ecclesial world.  Even Christian men supported the initiative interpreting it rightly as a strong action in contrasting clericalism”.

The appointment with the French theologian Anne Soupa,  was set for 12 December at 10.00 am. The introduction was by Paola Cavallari (OIVD President), in dialogue with Paola Lazzarini (President of Women for the Church) and with the nun and theologian Antonietta Potente. The event was moderated by Ludovica Eugenio, director of the Press Agency Adista.

“The meeting was organized – concluded Cavallari -, in fruitful collaboration, by Adista, Catholic Women’s Council, Women for the Church, FDEI, Voices of Faith, OIVD”.