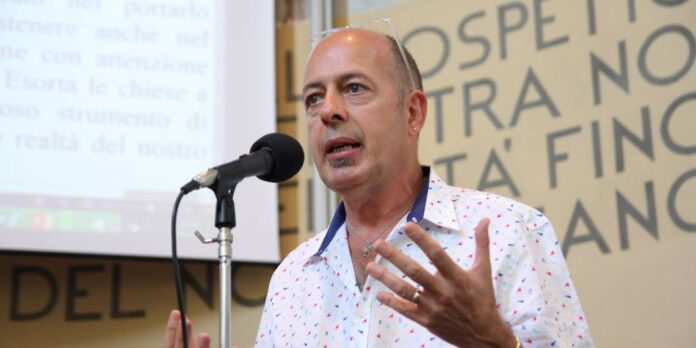 This is the second part of an extensive interview with Luca Maria Negro, a longtime leader in the ecumenical movement. This interview was conducted shortly before the election of his successor as president of the Federation of Protestant Churches in Italy.
In the first part of this interview, which the American Waldensian Society published several weeks ago, you spoke in depth about your hopes for the Christian churches in Italy. In this follow-up interview, we’d like to start by asking you if there is anything else you’d like to say to those who will lead the Federation of Protestant Churches in Italy after you give up your presidency?
I’d like to go back to the Book of Genesis. Chapter 13 in the Book of Genesis describes a dispute between Abraham and Lot over their respective flocks. They decide to separate in an honorable and peaceful way from each other. It should be easy enough to have a peaceful separation since the plain that their respective flocks will have to graze in is vast with plenty of room for both of them as well as their flocks. Yet, over time, the choice to separate has very serious consequences. From this separation, the descendants of Abraham and the descendants of Lot will become bitter enemies. It’s always that way: Once a separation happens, there’s no turning back. If you separate yourself from your brothers – or your sisters – when you meet again, it’s likely you will meet as enemies.
This biblical story brings to mind a temptation in all the churches today. We once shared a great ecumenical enthusiasm, but for some time now, we have been slowly losing that enthusiasm. We have seen that loss of enthusiasm in official dialogues among Catholics, Protestants, and Orthodox. We have also seen that loss of enthusiasm inside Protestantism.
If you asked why, I’d say that perhaps because of the economic and political insecurity large numbers of our fellow human beings are feeling, many people are obsessing about identity and are therefore less enthused about the ecumenical project.
We may think that we ourselves are blessedly exempt from obsessing about identity. We tell ourselves and others that we stand against those who make national or racial identity, national sovereignty, or populism a flag under which they might identify. But are we really exempt from the sin of identity obsession? If the ecumenical project is a kind of journey, perhaps we should try a little harder to keep walking together on that journey, and not give up on making further progress the way Abraham and Lot did. So, one message I have for those who in the future will be leading the Federation of Protestant Churches in Italy is to keep nurturing the federative and ecumenical spirit, and not give up just because it is difficult to stay together on the journey. I hope we can rediscover the ecumenical vigor that is part of our history. In the Federation of Protestant Churches in Italy, we have been pioneers in our Protestant world, forging a common path bringing together Baptists, Methodists, and Waldensians. And, as we try to continue going together down that ecumenical path, let’s remember that others have gone further. We can look at the example of the Protestants in France where a few years ago all the churches that were based in the Reformation came together to give birth to the United Protestant Church.
In your opinion, is there room in the Italian churches for what many people are now calling “fresh expressions,” namely new ways to be in mission and to do worship that are outside the box of what people traditionally think of when they hear the word “church”?
I have just returned from a meeting of the Permanent Commission for Pastoral Formation, where we talked about this question. I think we must try not only to renew the way we pray, the songs we sing, and the sermons with which we try to stimulate our faith, we need also to look for new contexts, new physical places, new times in the week. Worship should not be restricted to church buildings. If we expand our mental and relational horizons, every place can be suitable for deepening and developing our spirituality. Perhaps we will do that best in small groups, where everyone can feel free to address their own questions and express their own faith.
What will you do now, after you lay down your responsibility as president of the Federation of Protestant Churches in Italy? Do you know yet how you will be spending your time in the future?
I will continue to do pastoral work in two congregations. In fact, I am already working on how to make our worship less static and more alive. I am very interested in the search for a new spirituality, a spirituality that is connected to the commitment to justice, peace, and protecting the integrity of creation. What I am thinking about right now is the example set by the Iona Community in Scotland which has become a center for bringing together music and social action. Like Dorothee Sölle, I am thinking about a kind of politically aware prayerfulness as a way of embodying spirituality.
This interview was conducted by NEV, the press agency of the Federation of Protestant Churches in Italy.
Luca Negro’s successor as president of the Federation of Protestant Churches is Daniele Garrone, an Old Testament scholar and professor at the Waldensian Theological Seminary.