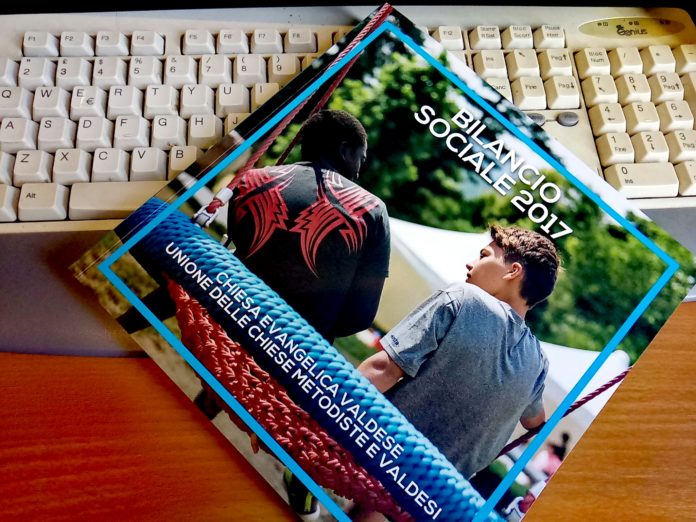 Torre Pellice (Turin), August 31, 2018 – “’To present an annual report’ is not only a democratic practice that allows  bottom-up checking, the transparency of the decision-making process and the assessment of the objectives decided together, it is also a precise theological choice that focuses on the responsibility of the Church”. These are the words of Eugenio Bernardini, moderator of the Waldensian Board, in the Preface of the 2017 Social and financial Report of the Methodist and Waldensian churches, presented during the Synod held in Torre Pellice (Turin).

This annual report of the Waldensian Evangelical Church – Union of Waldensian and Methodist Churches, reports on the activities carried out by the churches and the Waldensian Diaconate (CSD) in 2017.

The volume is divided into five chapters and was designed, as reported in the Methodological Note by Barbara Imbergamo (CSD fundraising service manager), “for people outside the reality of the Methodist and Waldensian churches wishing to know their history and activities”.
The five sections that make up the publication provide information on the history and the values, the organization and the decision-making processes, and on the structures and personnel involved in the activities. The heart of the 2017 Budget is represented by the chapter on Church activities and services of the Diaconate, which highlights, through qualitative and quantitative data, all the activities carried out.
There are data on services for the elderly (365 people assisted), those relating to minors and young people (about 900 boys and girls reached in the various services of the territory), for adults and families (residential services for women in difficult conditions, adults coming out of prison,  families in temporary need). Particularly significant are the data on services to migrants and refugees, which describe welcoming and inclusion projects with important implications: in 2017, 142 apartments and residential facilities were activated, which gave accommodation to 795 migrants; 224 scholarship trainings and, thanks to the Mediterranean Hope project, more than 1000 people arrived in Italy, through the humanitarian corridors.
The last chapter, dedicated to economic resources, presents detailed balance sheet data for both Methodist and Waldensian churches as well as for diaconal works and hospitals with a focus on the budget of the CSD and the “Eight per thousand” tax funds.
Giovanni Comba, president of the CSD declared to be particularly pleased” of this work because it intends to propose, even in the concreteness of the numbers, the unity of the communities and of the diaconal works as parts of the same church and the of the same need to witness the Gospel. The CSD had already tested some social budget editions between 2007 and 2011, and will have to prepare it regularly starting next year, under the new legislative provisions relating to the third sector entities”, he concluded.