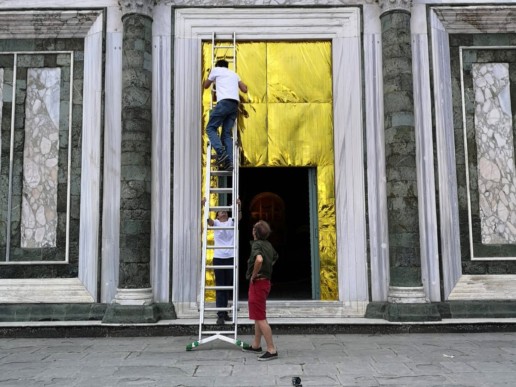 Rome (NEV), April 12, 2019 – An installation with a great emotional and symbolic impact, a shared worship service on Palm Sunday, a flash mob, a theater show, a march through the streets of central Florence: many initiatives organized by a group of Florentine Protestant Churches, members of the Federation of Protestant Churches in Italy (FCEI), on the issue of migrants reception.

The week from Palm Sunday (April 14th) to Easter Sunday (April 21st) will see the development of a series of initiatives on the theme of hospitality, around the installation “Eldorato” by Giovanni De Gara who uses as raw material a life-saving object: the isothermal blankets normally utilized for  first aid in case of accidents and natural disasters, which entered the collective imagination as “migrants’ garb”.
The doors of the Baptist church of Borgo Ognissanti, of the Lutheran Church of Lungarno Torrigiani, of the Methodist Church in Via de’ Benci, of the Waldensian church of Via Micheli, of the Salvation Army in Via Aretina, and of the seat of the Waldensian Diaconate in Via de’ Serragli, will be transformed in this way during that week.
The aim of the project is to promote a profound reflection on the theme of hospitality towards each individual, without distinction of race, gender and creed and to give a sign of warmth and salvation starting from the contemplation of a gold that shines not by carats, but for the beauty and simplicity of his message.