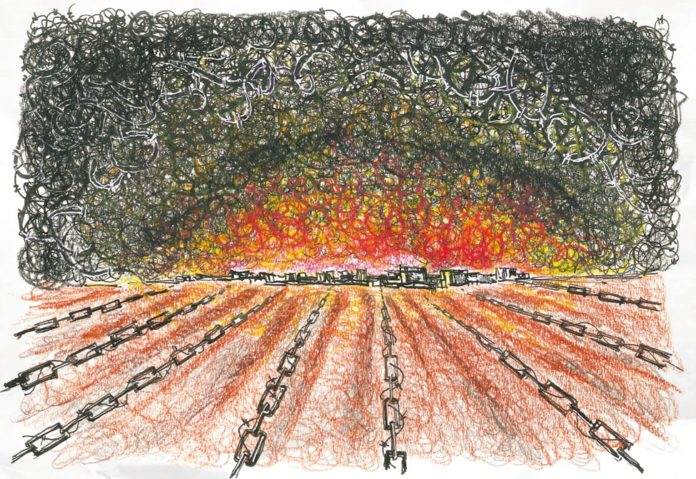 Rome (NEV),  May 20th, 2019 – the picture of the vessel has become a symbol of the Italy that welcomes and does not reject. On the socials and during the many meetings with students throughout Italy, Francesco Piobbichi operator and social cartoonist of Mediterranean Hope refugee and migrant program of the FCEI, narrated and continues to narrate the migrations from the point of view of those who live and suffer them. His third book, Sulla Dannata Terra is on line edited by Claudiana. This story begins with the strike of the pickers of Nardò, Puglia, in 2011. The proceeds will be donated to the campaign SOS Rosarno.

Who are the damned of the earth? Why this title?

Frantz Fanon in his most famous work speaks of the “damned of the earth”, this title is a tribute to the anti-colonialist resistance movements in Africa. I inverted the terms used by the Martinique psychiatrist, focusing on the theme of the earth because this struggle is strictly material, it took place in the fields, in the first person, by invisible and voiceless people. Nardò’s strike tells us that if we are united, even in the face of unfavourable power relations, we can change things. 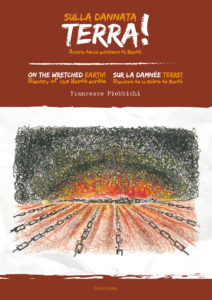 How has this strike ended? After eight years, does the exploitation continues?

Workers continue to be exploited, their cabins that burn  remind us of their current condition, just for a moment,  as road accidents in which dozens of them perish. Slavery continues because following that strike and the laws made against the caporalato, the system of intensive exploitation has soon found new forms. Just think about the introduction of cooperatives that semi-legally select and employ pickers.

After“Disegni dalla frontiera” and “Sul mare spinato” have you completed a trilogy dedicated to the theme of migrations?

I would like to say it completed. Unfortunately, however, the frontier continues to grind lives and the first book, “Disegni dalla Frontiera” (Drawnigs from the border) is constantly updated, is a living work, like an open wound. It is true, however, that with this book I have completed a journey that lasted years, from the fields of exploitation  I have been even further to south, in the Mediterranean sea and beyond. And it is the Mediterranean sea where I have understood where migrants are made linked to the border for the rest of their lives. “Sul Mare Spinato” (Barbed Wire Over the Sea), in fact, tells of the rescue operations carried out by the Open Arms, and “Sulla Dannata Terra” tells of Nardò’s strike, are stories that are placed vertically in time, in the context of a general work on the theme of borders.

It is the first book in three languages. Why this choice?

Because this book is not only meant for Italians but as a tool for pickers. This story is theirs and it is right that they know it. Perhaps, they can organize another strike. They would need it.

Will you keep working?

I think so, the drawing for me does not have an artistic dimension, it is part of the story of the things I see, of the anger I feel. To stop drawing would be a bit like to stop living.