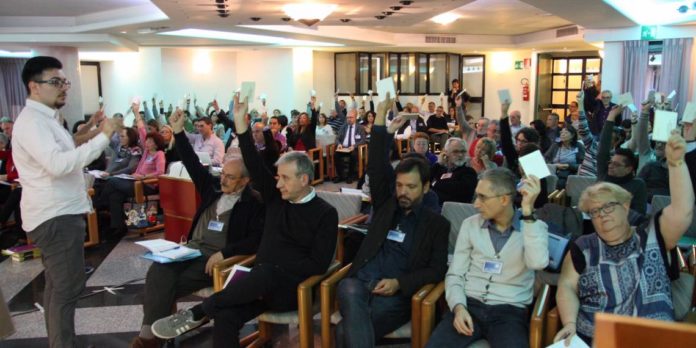 Rome (NEV), November 2nd, 2016 – Giovanni Paolo Arcidiacono is the new chairman of the Executive Committee (EC) of the Christian Evangelical Baptist Union in Italy (UCEBI). To elect him, the one hundred delegates gathered in Chianciano Terme (Siena) from October 29 to November 1st, for the 44th UCEBI General Assembly.

Giovanni Paolo Arcidiacono was born in Lentini (Sicily) 68 years ago, he has been living in Bari since the 60’s where he was a secondary school teacher. He was local pastor in Apulia and held several positions within the Italian Baptist Church. In his speech after the election, he briefly addressed the Assembly: “Pray for me, to build together a Union of churches able to seize the challenges of our time”. The Assembly opened on October 29 with a worship held by Pastor Raffaele Volpe, retiring president who has now completed his third and final mandate.

During the works seven new local churches were accepted within the Baptist Union. Among the themes discussed: intercultural dialogue, the UCEBI 60th anniversary, the 500th Anniversary of the Protestant Reformation, the 8 per thousand tax funds, homophobia, violence against women. A motion was approved which commits the congregations to initiate a process that “will lead to the blessing of same sex couples, where requested”.

Many guests brought their greetings to the assembly. Among them, pastor Luca Maria Negro, president of the Federation of Protestant Churches (FCEI); Marta Bernardini e Luciano Griso, FCEI operators respectively in Lampedusa and in Lebanon for the project Mediterranean Hope.