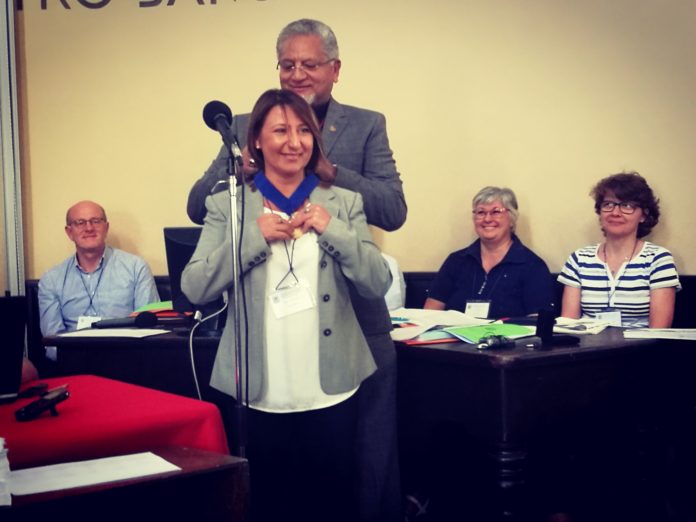 Torre Pellice (Turin), August 31, 2018 – Bishop Ivan M. Abrahams and Gillian M. Kingston, respectively secretary general and  vice president of the World Methodist Council (WMC), bestowed the prestigious “World Methodist Peace Award” to the  Methodist Churches’ Work organization in Italy (OPCEMI), for its constant and convinced commitment to and for migrants and refugees, an activity that dates back to 1989, with the following motivation: “This small church (part of the Union of Methodists and Waldensians in Italy) has exhibited great courage when faced with the large crisis of refugees and migrants flooding Europe. When others said the problems were insurmountable, the OPCEMI’s attitude has been that ‘we could do no other – we could not sit by and let this happen’. The motivation emphasizes the commitment to the “humanitarian corridors” and to the “House of Cultures” in Scicli, Sicily, where there is a Methodist church. The “House of Cultures” is part of Mediterranean Hope – the refugees and migrants program of the Federation of Protestant Churches in Italy (FCEI).
“It is with joy and honor that on behalf of OPCEMI I receive this prestigious award that men and women of value, inspired by feelings of faith and peace, have received before us. I can not forget, for example, that the former UN secretary general, the Ghanaian Kofi Annan, received it in 1998”, declared OPCEMI president Mirella Manocchio, in receiving the medal.
“Ours is a small church in Italy, but even the disciples of Jesus Christ were just a few at the beginning of Christianity and yet the Holy Spirit led them to do great things”, continued Manocchio.

The award was established in Dublin, Ireland, in 1976, during the critical and conflicting years known as Troubles. Its requirements have always been courage, creativity and consistency.