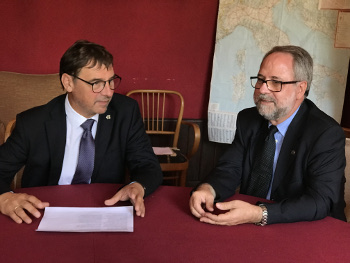 Both the moderator and the president were shocked by the recent refugee policy in Italy and Germany, as well as by the widespread tendency in Europe to undermine the asylum right, and by the drop in solidarity. They also agreed that “Europe loses its soul when values such as respect for human dignity, freedom, democracy, equality, the rule of law and the defense of human rights are increasingly challenged”. 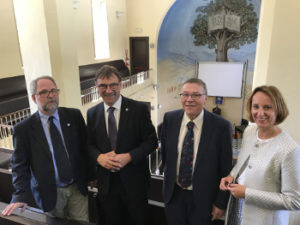 Both churches have been committed for a long time and in a considerable manner, in professional, voluntary and financial terms in favor of a humanitarian reception of refugees and their integration into society. With the program “Being a church together” the Waldensian and Methodist communities in Italy have opened up to people coming mainly from Africa. With the project “Mediterranean Hope” (refugees and migrants program of the Federation of Protestant Churches in Italy – FCEI), Italian churches present alternatives for the reception and integration of refugees in Italy. In the Evangelical Church of Hessen-Nassau, several thousand volunteers are committed to helping refugees, providing free language courses, accompanying them in negotiations with public authorities, in the search for a job or a place of training. Both churches are committed to a respectful reception of the human dignity of people who are often seriously traumatized. According to Bernardini and Jung these efforts are hindered, impeded and deeply challenged by the current policy on refugees that is inhumane and partly illegal.
The German and Italian churches support humanitarian organizations for sea rescue. Currently the latter are often hindered in their work, as ports in Italy and Malta are closed to them, administrative rules avoid their departure, or the “Maritime Rescue Center for the Central Mediterranean Region in Italy” advises commanders to deliver the saved people to the Lebanese Coast Guard. 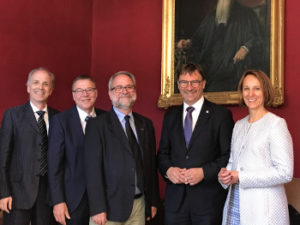 Therefore the moderator and the president demand a return to a refugee policy based on protection and human rights.
They call on European institutions and governments to organize a truly efficient sea rescue system, to prevent the criminalization of humanitarian organizations that are currently saving people instead of those in charge; to ensure safe escape routes and generous humanitarian reception for refugees, such as the project of humanitarian corridors that is being carried out ecumenically in Italy, France and Belgium. Furthermore, both argue that refugees should be shared between different European countries.
The Waldensian Church and the Evangelical Church of the Hessen-Nassau region have been bound by a close relationship for many years. Besides theological exchange, reciprocal visiting programs and support for the respective diaconal projects and by the commitment to refugees, some of the Hessen-Nassau communities are still closely linked to the history of the sufferings of the Waldensians during their persecution back in the 17th century