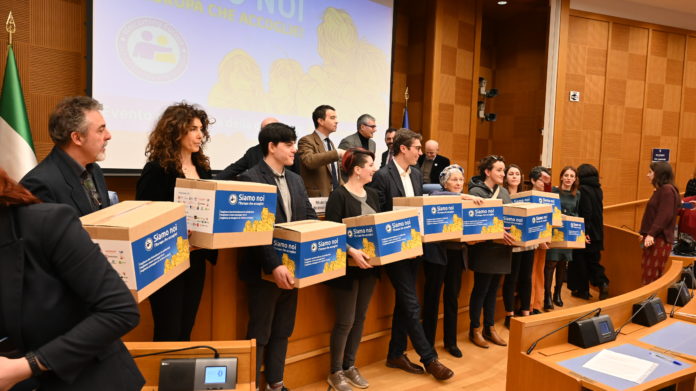 Rome (NEV), February 21, 2019 – This is the Italian result of the campaign “We are a welcoming Europe”, of which was held the closing event last Wednesday 20 February, at the Chamber of Deputies.

The aim of the mobilization was to launch an initiative of European citizens (ICE, an instrument of participatory democracy to ask the European Commission to ban criminalisation of solidarity, to support people who want to offer safety, to help victims of exploitation and abuse in seeking justice). The necessary goal of one million signatures unfortunately was not reached at the European Community level, while in Italy the prefixed number of signatures has been exceeded.

However, all the speakers present at the closing meeting evaluated the Italian result as an important and symbolic first step to change direction in terms of migration and reception policies.

Luca Maria Negro, president of the Federation of Protestant Churches in Italy (FCEI), recalled and explained the experience of humanitarian corridors, realized in cooperation with the Community of St. Egidio. “We have a dream – declared Negro -: the creation of European humanitarian corridors also from Libya. But to oppose this project to the rescue of people at sea does not make sense. Precisely for this reason, we strongly support the work of the two NGO’s, Open Arms and Seawatch, with which we collaborate”.
The initiative was promoted, among others, by Radicali Italiani, FCEI, Legambiente, Cnca, Casa della Carità Foundation, Oxfam, ActionAid, A Buon Diritto, Acli, Arci, Baobab Experience, CILD, with the adhesion of Centro Astalli, Caritas, Migrantes Foundation, Sant’Egidio, Libera, Cgil, Fiom, Cisl, Diaconia Valdese, Altromercato, Banca Etica, Open Arms, Seawatch, Amref, Rainbow for Africa, Amnesty International.

To the event attended over 140 civil society associations, NGOs and churches.