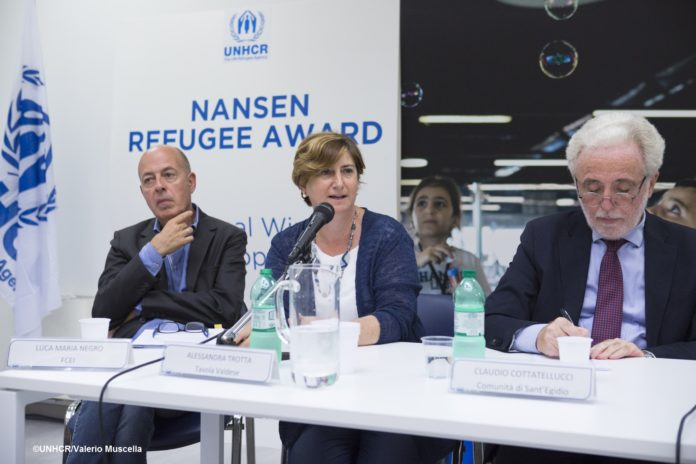 The 2019 Nansen Refugee Award goes to Humanitarian Corridors, FCEI and the Waldensian/Methodist Church: “We dedicate this to those dying at sea and in Libya”

“Humanitarian Corridors” is the recipient of 2019 Nansen Refugee Award, awarded by the United Nations High Commissioner for Refugees (UNCHCR) to individuals or organisations which distinguish themselves by the support they provide to the world’s refugees.  Behind the “Corridors”, which have enabled more than 2,600 people to be brought safely and legally to Italy, lie the Waldensian/Methodist Church and the Federation of Protestant Churches in Italy (FCEI), together with the Community of Sant’Egidio, the Italian Bishops’ Conference and Caritas, in collaboration with the Italian administration.

“We are proud and honoured to receive this prestigious award,” said Luca Maria Negro, president of the FCEI, and Alessandra Trotta, moderator of the Waldensian/Methodist Church, during the press conference which took place today at UNHCR’s Rome office.  “We believe wholeheartedly in the Humanitarian Corridors project, which we think can be considered an example of best practice for the whole of Europe, in various parts of which it can already be found.  We would like to thank all those who make possible the impressive work which lies behind the complex Humanitarian Corridors machine and in particular our beneficiaries, the people who arrive in Italy from Lebanon through this safe and legal channel.

We wish to thank them for their placing their trust in us and for giving us a means to recall our humanity.

We wish to dedicate this award to those who, in contrast, have not had this opportunity, all those detained in Libyan detention centres, and those people who regrettably continue to die in the Mediterranean Sea.  We hope to be able to put in place a large-scale European corridor which will bring them to safety.  We would like avoid more carnage in the middle of the Mediterranean Sea.  Meantime, those compelled to take to the seas must be rescued and for this we continue to wholeheartedly support the valuable work of the NGOs which save lives.  Whoever saves a life saves the whole world: the recognition which has been awarded us today is, for us, an incentive to continue to do better what our faith and moral code require us to do: to be the Good Samaritan who stops to help”.

Promoted by the Community of Sant’Egidio, the Italian Bishops’ Conference, Caritas Italiana, FCEI and the Waldensian/Methodist Church, “Humanitarian Corridors have been given an award for having guaranteed for thousands of refugees and people with specific needs a safe channel through which to receive protection and the possibility of rebuilding a better future in Italy,” explains a UNHCR memorandum.

Launched in 1954, the UNHCR Nansen Refugee Award is conferred each year to a person or organisation which has dedicated itself to helping those compelled to flee their homes.  The award is named after Fridtjof Nansen, a Norwegian polar explorer and humanitarian who first held the role of High Commissioner for Refugees for the League of Nations, from 1920 to 1930.  Amongst the long list of winners, some better known than others, the award seeks to recall the values of perseverance and tenacity in the face of adversity which guided Nansen during his term of office.