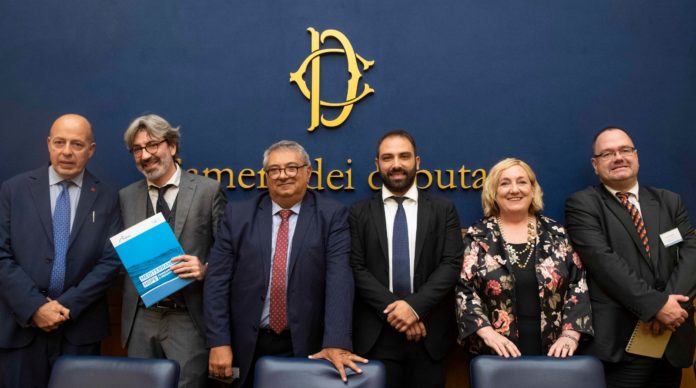 Rome (NEV), 8th October 2019 – Italian humanitarian corridors set the precedent for Europe.  Yesterday and today, 7 and 8 October, representatives of Protestant church from 15 EU countries came together in Rome to discuss this example of good practice.  Today, at the conclusion of these two days, there was a press conference at the Camera dei Deputati with Vice Minister for Foreign Affairs and Co-operation Emanuela Del Re and president of the Commission for Consitutional Affairs for the Chamber, Giuseppe Brescia.

Vice Minister @ecdelre today @Montecitorio at the launch of the project #corridoiumanitarieuropei: «Humanitarian Corridors are a credit to Italy: the government will work to make them become a mechanism which  fully complies with #EU values because they also need European financial support »

Paolo Naso, coordinator of #MediterraneanHope, #FCEI  now at the press conference at @Montecitorio: an Italian ecumenical experiment, #humanitariancorridors has become an example for Europe.  Backed by the force of European Protestant churches, today we seek to bring this practice into the EU.

The FCEI’s objective is to open a legal access channel, namely, a humanitarian corridor at the European level, shared by more member states to transfer 50,000 vulnerable people from around Libya.

Also present at the meeting with the press was Torsten Moritz, Secretary General of the Churches’ Commission for Migrants in Europe (CCME), who confirmed the commitment of this umbrella organisation, which brings together bodies concerned with migrants from various European Anglican, Protestant and Orthodox churches and associations.

See the video from the press conference at the Camera dei Deputati here:

“Open up European Humanitarian Corridors” which, based on the experiment implemented in Italy from 2015, will provide a secure and legal access route into Europe for tens of thousands of refugees trapped in and around Libya:  this is the proposal and request which the Protestant churches of Europe put to the Italian government, European partners and EU institutions at the International Conference which took place in Rome on 7th and 8th October.

At the meeting, which was called by the Federation of Protestant Churches in Italy which manages the programme for refugees and migrants known as Mediterranean Hope, were representatives from 15 countries belonging to 25 European and international churches and ecumenical organisations: “It has been an exceptional opportunity to meet and has made clear the extent to which European churches are committed to innumerable projects supporting policies for reception and migrants’ human rights,” commented Rev Luca M. Negro, FCEI president.  “It has launched a policy proposal which is sustainable and proven to work, namely, that of Humanitarian Corridors, albeit on a European scale.  As is natural,” added Nero, ”Italy is among the EU countries which are most exposed to migratory flows and it is fair and understandable, also at a political level, for it to assume leadership in seeking solutions which guarantee security and sustainability as well as the upholding of human rights”.

“We have taken the opportunity at this conference,” added Paolo Naso, co-ordinator of MH, “to directly address political institutions, presenting the outline of a proposal which has been defined in general terms but whose technical aspects have yet to be finalised.  In that connection, the meetings with Vice-minister Emanuela Del Re, who has always been attentive to this topic, have been of huge importance because they have allowed us to consider the merits of certain technical questions,” continued Naso, and that enables us to strengthen our proposal.  In the same way we have gladly noted the support expressed by the presidents of the Commmissions for Consitutional and EU Political Affairs for the Camera dei Deputati, the Hon. Giuseppe Brescia and Sergio Battelli.  The next stage will be 10 December in Brussels,” concluded Naso, “to present the definitive technical proposal, which has also benefited from comments and consideration by the United Nations High Commissioner for Refugees (UNHCR), to the Presidents of the European Parliament and Commission.

“Our commitment is not only of a political nature,” Negro affirmed once more, “but also educative and, if you like, pastoral.  As churches we have the task of shaking up public opinion and re-directing sentiments and fears from xenophobia to what, instead, the Bible calls xenophilia, love for the foreigner who is also our neighbour.”