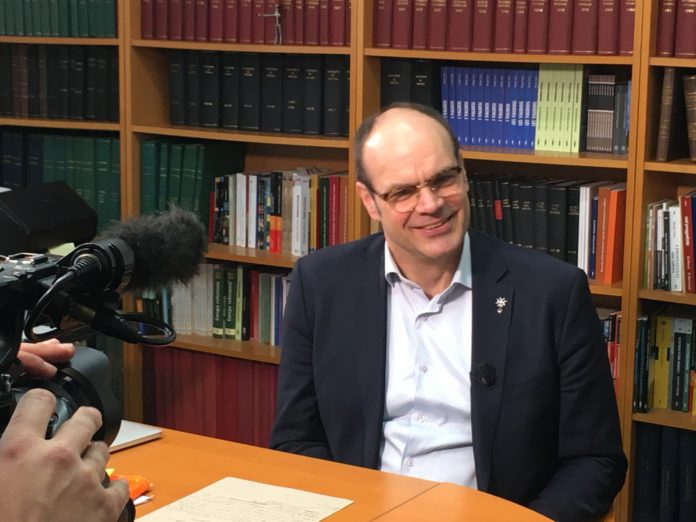 Rome (NEV),  January 31, 2020 – The president of the Conference of European Churches (KEK), pastor Christian Krieger, visited the Italian churches belonging to the continental ecumenical body. On January 29 morning he met the president of the Federation of Protestant Churches in Italy (FCEI), pastor Luca Maria Negro, and the President of the Work for the Methodist Evangelical Churches in Italy (OPCEMI), pastor Mirella Manocchio.
On the occasion, pastor Krieger gave an interview to the TV program Protestantesimo, which will be broadcast on National TV channel Rai2,  next March. The NEV Agency has collected a brief preview on the issues addressed by the president of KEK: Brexit, overcoming populism and the role of churches in the Europe of the future.
“We are in a critical phase of European history – said Krieger -. This is why, as churches, it is important we continue to be strong and work together, for the Europe we have built and the one we intend to build. We need cooperation and to go beyond ideological and political limits and borders”.
The KEK president also recalled the importance of constantly monitoring that religious symbols are not used in an instrumental way. Populism creates divisions, marginalization and discrimination that affect minorities. For this, said Krieger, “The churches asked the President of the European Parliament, David Sassoli, to take part in the ongoing process. Europe’s democratic re-founding project also needs churches”.
Krieger underlined the need to regain confidence in Europe, in its principles and in its values ​​of freedom, social solidarity, democracy “which, hand in hand with our principles of faith, call for reconciliation, cooperation and solidarity, also as regards climate and migration crises”.
On January 30, Pastor Krieger was received in private audience by Pope Francis, together with the president of the Commission of the Bishops’ Conferences of the European Union (COMECE), Cardinal Jean-Claude Hollerich, both to commemorate the anniversaries of the respective Conferences, and to talk  about the common strategies that see Protestants and Catholics ecumenically together: “If we want to promote Christian unity – concluded Krieger – we must have a common voice”.